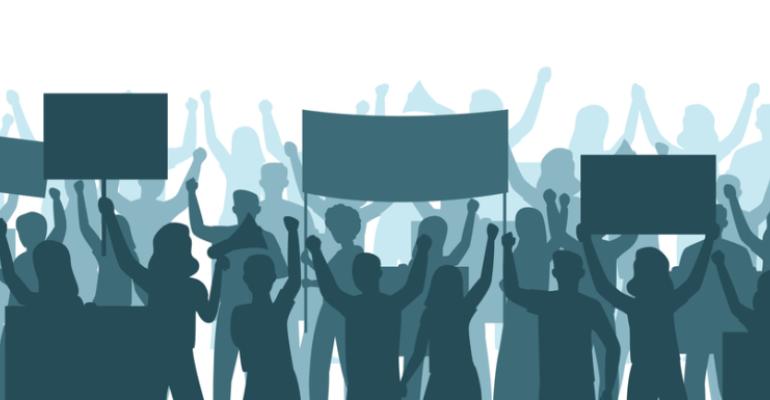 Workers in Orlando and Las Vegas are setting the pace for fellow union members in three other cities, authorizing a strike in Orlando while setting a date for a strike vote in Las Vegas.

With an overwhelming “yes” vote authorizing a strike sometime after their contract runs out on November 30, foodservice workers at the Orange County Convention Center in Orlando have fired the opening salvo in what could become contentious labor negotiations at convention centers in five large U.S. markets.

In an effort to gain higher wages, better benefits, and revised work schedules, Sodexo/Centerplate foodservice employees at centers in Orlando, Las Vegas, New Orleans, Detroit, and Sacramento—all represented by national hospitality-workers union Unite Here—are bringing into play the possibility of strikes if contract negotiations do not satisfy them.

Across the five cities, the average hourly wage of Sodexo/Centerplate workers was $11.77 in in February 2020, just before the Covid pandemic shut down the live-events industry. With the industry reinvigorated in 2022, those wages had increased 5.7 percent to $12.44 by August, while the national seasonally adjusted rate of inflation over that time frame was 14 percent.

A press release by Unite Here noted that “Sodexo/Centerplate reported a strong increase in revenues and profitability in fiscal year 2022, and meeting levels in 2023 and 2024 are expected to surpass those from 2019, according to a forecast by industry-research firm Knowland.” Between February 2020 and August 2022, though, the five convention centers saw a 38-percent reduction in Sodexo’s total workforce, with 53 percent of kitchen jobs lost, 50 percent of bartender jobs lost, and 47 percent of food-counter jobs lost. As a result, the unions want more staff hires and revised schedules to prevent overwork, in addition to improved wages and benefits.

"Taking a strike vote is a normal part of the collective-bargaining agreement negotiations-preparation process for Unite Here," said a Sodexo spokeperson on November 21. "Accordingly, we continue to engage in good faith during ongoing CBA negotiations, in a sincere attempt to reach a fair and competitive set of long-term agreements in a timely manner. Bargaining sessions are scheduled in the weeks ahead."

On the other side, Unite Here President D. Taylor commented on that same day that “the industry is saying 2023 will be a good year for them, and the workers who make meetings and events possible deserve to share in that recovery. Strikes at the country’s second and third largest convention centers are a real possibility” if negotiations languish.