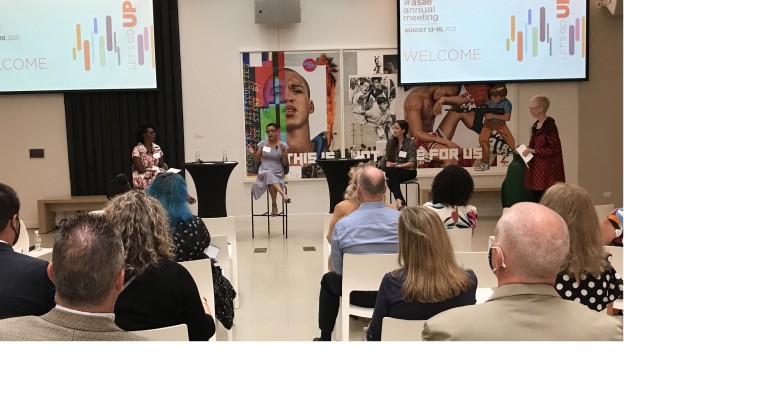 The Chicago edition of ASAE's Community Pop-UP drew more than 50 people. Together, they watched sessions from ASAE's Annual Meeting and then networked not just with each other but also with virtual attendees via an online lounge.
Association Conventions and Expos

The association for associations just conducted its annual meeting as a five-day virtual event along with one-day in-person gatherings in 10 cities. Here’s how it went.

The American Society of Association Executives was determined to have at least some type of face-to-face component for its 2021 Annual Meeting & Exposition, which took place from August 13 to 18. And ASAE made that happen in a unique way, using what it calls “Community Pop-UP” gatherings in five cities on August 16, three other cities on August 17, and two other cities on August 18—all of which synched up to the virtual event’s agenda.

As a result, more than 500 of the annual meeting’s 2,468 attendees were able to participate in a Community Pop-UP event, engaging in six hours of in-person interaction.

Besides watching meeting sessions alongside local colleagues through the Intrado virtual platform, Pop-UP attendees also experienced at least one in-person presentation at their location. Further, each Pop-UP audience was shown on camera at a certain point in the day to provide the full audience with a taste of that location’s environment—something that Courtney Robinson, CMP, who until mid-August was ASAE’s director of meeting operations and event experience, described as “a New Year’s Eve-style check-in” that brought energy to both the virtual and in-person audiences.

Another interesting component that united online and in-person attendees was the virtual lounge that allowed digital attendees to mingle with in-person attendees via real-time online video. And because the 10 Pop-UP gatherings didn’t all happen on the same day, virtual attendees were able to interact with people in several cities over the course of the meeting.

To create interaction between virtual attendees and sponsors, ASAE used what it called Action Labs in the Intrado platform where “we take the industry partners and make them content experts to engage with attendees that way,” said Robinson. Specifically, the labs allowed sponsors to lead a workshop with attendees with the goal of solving a problem, getting deeper perspective on an issue, or fleshing out an idea that is relevant to the industry, according to Robinson. The labs ran during breakout-session times in the agenda. Alternatively, the agenda included Solution Demos at a different time where exhibitors led live virtual product demonstrations.

ASAE’s Entire Event Portfolio Is Evolving
As the annual meeting neared its end, ASAE began to focus on what’s next. First, in a press conference for the trade media, Susan Robertson, CAE, the outgoing president and CEO of the association, noted that “we expect most of our major meetings on the horizon to be hybrid.”

This includes a new event called Associations Transform, which will bring together association executives to develop new solutions for their organizations’ challenges using insights from the ASAE Foundation’s Foresight Works future-focused research initiative. That event will be held over one and a half days in the first half of 2022. Further, “our 2022 annual meeting in Nashville is expected to be primarily face-to-face,” she noted.

On the other hand, the association’s Great Ideas conference is being retired after 17 years, as is the XDP (experience design project) event after five years. According to Robertson, making these moves “creates the space we need to do new things and support our strategic plan,” which will include an “aspiring C-suite knowledge network” that’s coming next year.

With XDP, “we chose five years ago to invest in it at a loss so we could assist the community.” The event-design conference was a replacement for the Springtime one-day trade show that ASAE ran for many years in Washington, D.C.

Then on September 1 came the leadership transition at ASAE. Michelle Mason, FASAE, CAE, took the helm as ASAE president and CEO, replacing Robertson, who took the job in March 2020 on an 18-month assignment.