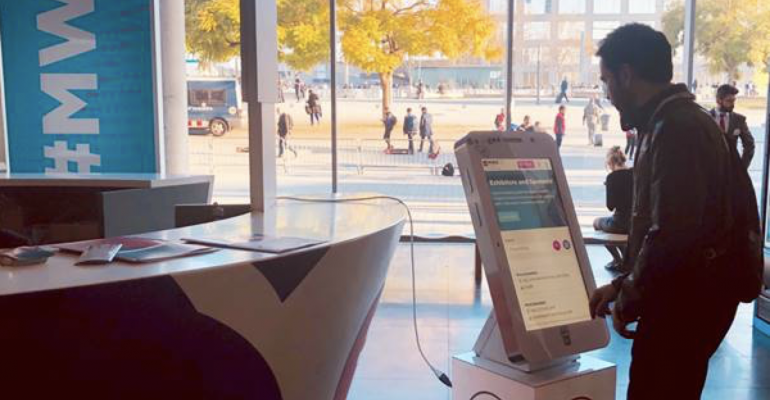 The organizers of MWC Barcelona chose to migrate to the electronic medium for all event information, and used an interesting prop to drive adoption among attendees.

Dubbed "The World's Largest Carbon Neutral Trade Show" by Guinness World Records for the past two years, MWC Barcelona took another step towards sustainability at its 2019 event when it chose to eliminate printed event guides. In its place, the event's website ands app were beefed up to include the full program, exhibitor lists, floor plans, and other useful information. And to promote usage of the website and app by the 109,000 attendees and 2,400 mobile-tech exhibitors, show owner GSMA partnered with Giant iTab to install 20 of the company's 43-inch smartphones around the show floor, in the corridors leading to breakout sessions, in prefunction and refreshment spaces, and at shuttle drop-off points.

Besides being able to get familiar with the information featured on the website, attendees and exhibitors could download the event's mobile app to their own devices directly from the oversized smartphones, by placing their personal device against the near-field communication (NFC) point located at the top of each unit. More than 250,000 touches were recorded on the giant smartphones over the three days of the event, and post-event surveys found that attendees who used the units felt more involved in the show because they found information more easily and were able to better plan their day.

After the 2019 event, GSMA signed an agreement with Giant iTab to provide at least as many 43-inch units for the 2020 and 2021 MWC Barcelona shows.