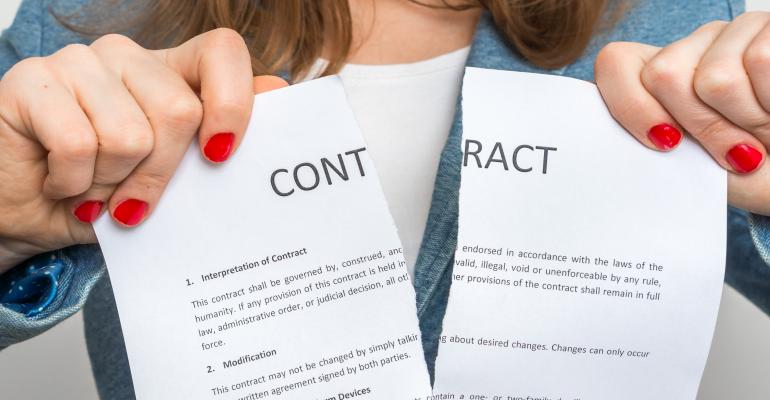 On March 12, the Mechanical Contractors Association of America was forced to cancel its annual conference due to the global coronavirus pandemic. The conference was scheduled to take place later that month at the Grand Wailea Resort Hotel & Spa in Maui, Hawaii, which is owned by BRE Iconic Holdings LLC, a Hilton franchisee.

MCAA invoked the force majeure clause in its contract with the hotel, which says that parties can cancel "due to the acts of God, war, terrorism [...] government regulation, disaster, fire, hurricanes, strikes, civil disorder, curtailment of transportation facilities preventing or unreasonably delaying at least 25 percent of meeting attendees and guests from appearing at MCAA's meeting, or other similar causes beyond the control of the parties making it inadvisable, illegal, or impossible to hold the meeting as planned."

A report on legal website Law360 says that BRE Iconic Holdings told MCAA it did not have the funds to return attendees their deposits, which amounted to more than $1.4 million. Rather than leave association members out of pocket, MCAA loaned BRE another $1 million so that members could receive event refunds. But according to the lawsuit, BRE kept the $1 million rather than issue the refunds—and billed the association for an additional $679,295 in cancellation fees.

Edward T. Kang of Kang, Haggerty, & Fetbroyt LLC, the firm representing the association, said that “MCAA is disappointed in both Hilton’s and its franchisee’s conduct. While MCAA understands COVID-19 affected the hospitality industry terribly, that is no justification for refusing to return the deposits for the rooms canceled due to COVID-19.”

Early on in the pandemic, Hilton announced that it would allow any reservations to be changed or canceled at no charge up to 24 hours before the scheduled arrival date, in an effort to reassure nervous guests. MCAA alleges that it canceled more than 24 hours in advance of the convention and, based on the contract clause and the public statements made by the hotel chain, the deposits should be refunded. “Hilton should make sure its franchisees honor the promise,” Kang says. “MCAA is disappointed as it expected a higher standard of conduct from Hilton and its franchisees.”

Neither BRE Iconic Holdings nor Hilton responded to a request for comment from MeetingsNet.

The case should concern meeting planners who assume that a force-majeure clause will be honored and protect venue deposits, and could be a warning to other associations that goodwill gestures can lead to large losses.

The case is Mechanical Contractors Association of America Inc. v. Hilton Franchise Holding LLC, in the U.S. District Court for the District of Delaware.