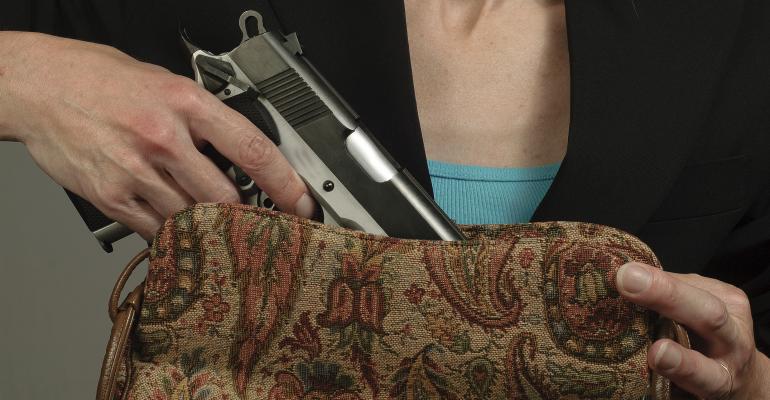 Are You Prepared for Gun-Toting Attendees?

Now that many states allow guns in public spaces, pistol-packing participant could be coming to your next meeting. Are you prepared?

If you plan meetings for the National Rifle Association, you may not bat an eye at the idea of allowing gun owners with permits to carry concealed weapons into your meeting space, as is the case at many of the NRA’s annual meetings. The only exceptions are in areas that fall under Secret Service jurisdiction, such as the NRA Institute for Legislative Action Leadership Forum, and in areas where alcohol is being served.

The Secret Service put the kibosh on guns entirely at the last Republican National Convention, held in 2016 in Cleveland, despite an intense lobbying effort by gun-rights devotees on Change.org and a generally firearm-friendly delegate group. “Only authorized law enforcement personnel working in conjunction with the Secret Service for a particular event may carry a firearm inside of the protected site,” said Secret Service spokesman K. Hoback in a statement ahead of the event.

Now that many states allow guns to be carried into public spaces, armed attendees may be coming to your next meeting if the practice complies with the host state’s laws. And just like with any other meetings-related issue, your organization should have a policy on handling guns at your meetings, said Josh Grimes, an attorney with Grimes Law Offices, during a session at the Meeting Professionals International World Education Congress in Atlantic City a few years back.

A few things to consider:
• Review the gun-carry laws of your host state with a local attorney.
• Develop a policy around what will and will not be permitted, and distribute it well ahead of time.
• Hire security to help enforce the rules.
• Consider offering a “firearms check” along with a coat-check area. This could come in especially handy if there are certain areas that your policy determines should be free of firearms, such as areas where you’re serving alcohol or, if anyone in high office should be joining you, areas under Secret Service control.

Meet the Women Planning the Republican and Democratic Conventions
Jul 17, 2016

What’s the Worst Thing that Could Happen at Your Meeting?
Jul 12, 2016