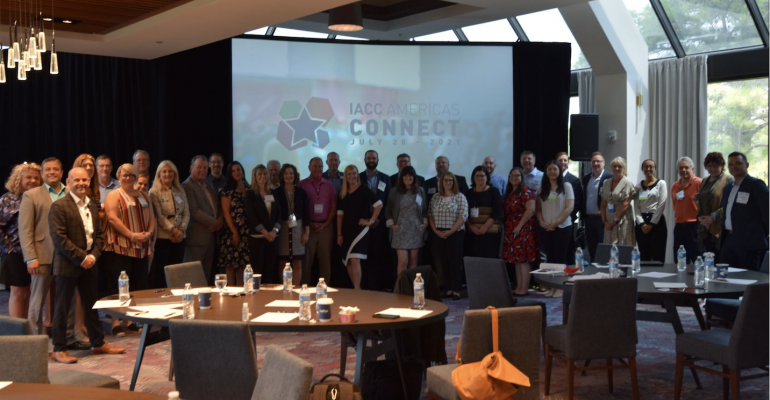 6 Lessons from a Multi-Site Hybrid Event

On July 20, IACC (formerly the International Association of Conference Centers) held its 40th annual meeting in an ambitious format that is likely to appeal to the association community as Covid continues the uncertainty around events.

For those attending the single-day event from afar, Encore hosted a virtual platform and also handled the on-site production that connected the in-person locations to remote presenters and to each other. The virtual audience comprised 120 attendees.

To keep attendees energized and focused, the virtual audience and the in-person locations each had its own facilitator. Their role: To lead the proceedings for their site when a keynote or general session wasn’t happening. Further, an overall event facilitator—who worked remotely from Taiwan—kept the flow of communication orderly between in-person sites and the virtual audience, in addition to keeping the agenda moving along smoothly.

Mark Cooper, CEO of IACC, says that while some associations might think a single large in-person gathering has the most appeal for attendees, “the most important thing is not losing the value of having people in person to build on their thoughts and ideas. And by connecting all the locations at certain times, the entire audience still gets the unique perspectives that come from different parts of the country or the world. People can attend a meeting with fewer challenges, less time commitment, and less environmental impact, but with the same business impact we need to deliver. And I don’t think [multi-site hybrid] is a solution that will be just for the Covid era.”

6 Observations to Guide Association Planners
1. “It was critical to have a facilitator for each site and for the virtual audience, but also a master facilitator,” Cooper says. “A facilitator’s mission is to be personable and develop camaraderie with their audience, and then use their facilitation skills to get the most from their audience.”

Each facilitator for a specific audience was an IACC member who volunteered for the role. The event’s overall facilitator, Mike van der Vijver of facilitation firm MindMeeting, trained each volunteer facilitator in the months leading up to the event “not only on moving the agenda along but also on getting conversations to flourish among their audience. It worked really well because they understand our industry’s issues.”

2. “Our best examples of communication and learning across all of our audiences came from ‘innovation labs’ we ran in the afternoon,” says Cooper. These involved putting forth a central issue, challenge, or objective and having each audience act as a separate working group for a set period. Each audience, including the virtual audience that interacted via videoconference, discussed the topic, and created a summary report guided by their facilitator. When the full audience reconvened technologically, someone from each audience delivered the report to everyone, and the master facilitator asked questions to flesh things out.

3. High-level speakers were far less expensive when remote, but still compelling. “The overall cost of our speakers went down because we could present them remotely or at an on-site location they were close to,” Cooper notes. “No airfare, no extra days. One of our keynotes presented virtually and then did live Q&A, and it cost us at least 80 percent less than what it would have been to have him on site.”

IACC made sure to limit the amount of time on-site audiences had to watch presenters on screen. But “what was most interesting was that for our keynoter Daniel Fox, a wilderness explorer and nature photographer, I watched my fellow attendees in Dallas stay glued to the big screen. It was so encouraging to see that people are willing to become invested, not fidgeting with their phones. And the Q&A afterwards was energetic.”

4. Networking quality was high—and in-person participants didn’t skip educational sessions to network. “Attendees said the relationships that were built by being in a group of about 50, as opposed to a group of 300 or more at previous events, were deeper,” Cooper says. “The chances of bumping into the same person more than once in a day and building on that conversation had many attendees saying they had more engagement than at past events. And while we would normally see some people spending time in the corridors chatting during breakouts, we actually found the opposite in this format; you're not trying to meet as many people as possible” at the expense of attending sessions.

5. Supplier attendees and sponsors liked the regional set-up. “It was simply easier for interested suppliers to get to a regional destination. So, we picked up some new sponsors, including a large one out of Dallas who sponsored” one of the general-session speakers.

6. Scattering board members across in-person sites made an impact. “Our 18 board members split up and went to the different locations. They were among the very few people who flew for this meeting, and on-site attendees felt valued because we did that. You can’t risk having attendees at a regional site feeling like they are an afterthought.”

Cooper is proud of what IACC achieved with its multi-site hybrid, and the audience responded with nearly 100 percent positive feedback, he says. “Overall, there was a general feeling of gratitude for bringing people back together again. They said they appreciated the event format for being creative.”