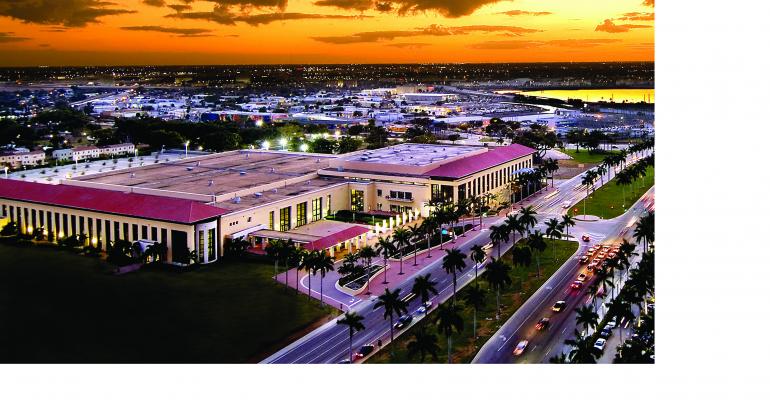 For most people, the first image that comes to mind when they hear the name Palm Beach is of ritzy shops along palm-lined avenues with the sound of the ocean in the background. Of course, that’s still an accurate image, but just across the half-mile-wide Intracoastal Waterway from the wealthy barrier island lies the city of West Palm Beach. And while it certainly has its share of high-end retail and dining offerings, West Palm Beach is also home to a bustling corporate base and the 350,000-square-foot Palm Beach County Convention Center.

With 1,200 hotel rooms within walking distance of the center plus the Kravis Center for the Performing Arts across the street from the center, “our sweet spot for conventions right now is 750 to 1,000 people,” says Jorge Pesquera, president and CEO of Discover The Palm Beaches, the convention and visitors bureau.

That sweet spot is going to change soon, though, as West Palm Beach sees two new hotels openings within a mile of the center. By March 1, both the Canopy by Hilton West Palm Beach and The Ben West Palm, a Marriott Autograph Collection property, will make their debuts, adding about 400 more rooms to the mix. If the cluster of hotels near Palm Beach International Airport—just three miles from the convention center—is included in a convention’s room block, groups as large as 1,600 can meet at the center without logistical difficulty. 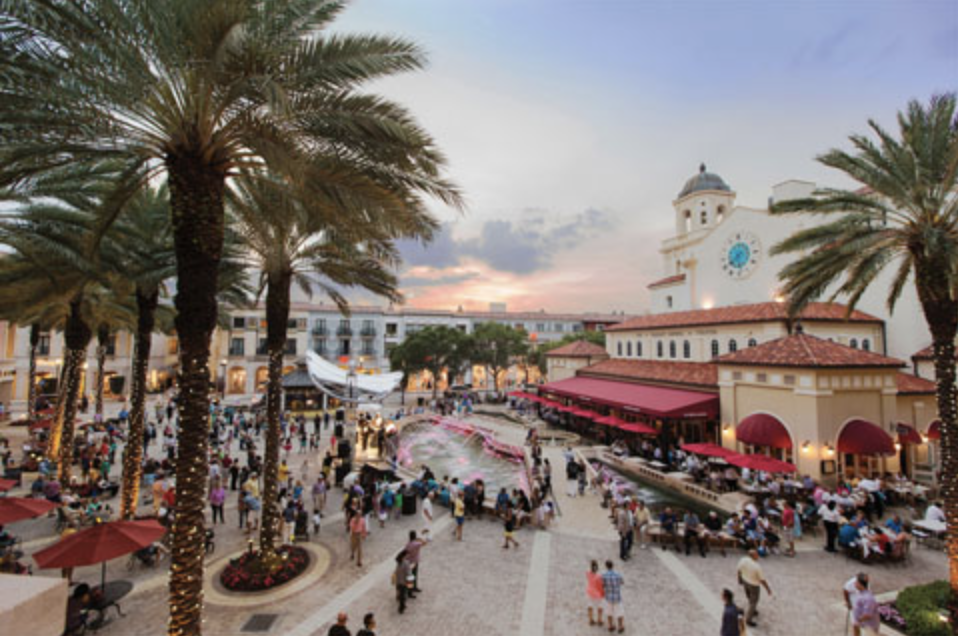 In 2018, DTPB booked 231,000 room nights for conventions, nearly double the amount booked just four years earlier. One key development designed to keep that number rising is the Rosemary Square district next to the convention center. The eight-square-block neighborhood is in the midst of a $500-million enhancement that’s adding more shops, restaurants, and entertainment options as well as upgrading a plaza (pictured here) that can host more than 800 people for a reception. It has large synchronized water features plus a 32-foot-tall artificial banyan tree equipped with more than 100,000 LED lights programmed for different displays. The plaza lies in front of Harriet Himmel Theater, a 90-year-old former church that can host private dinners for 200 or receptions for 400.

MeetingsNet caught up to DTPB’s Jorge Pesquera in early February to learn more about the elements of West Palm Beach that are of interest to meeting and convention planners.

MeetingsNet: The Rosemary Square district was formerly called CityPlace, which opened in 2000. How will its recent enhancements make it different for convention groups now?
Jorge Pesquera: Not only are there more restaurants, retail outlets, and entertainment and art offerings, but there are new condominiums being built above those storefronts that will make it a high-energy neighborhood all the time. And besides phasing out the traditional Mediterranean facades and replacing them with a more contemporary look, the district’s Main Street now has curbless sidewalks so it’s easy for convention groups to create street-fair-style receptions that also use the plaza. There’s also a Brightline rail station that just opened on the northern edge of Rosemary Square, so people from as far south as Miami can come to conventions here without driving.

MN: So there’s a lot going on around the convention center, but what’s happening at the facility itself?
Pesquera: Upgrades to an outdoor courtyard that’s adjacent to the prefunction space will be unveiled in early September. It is a multipurpose space with lush perimeter landscaping which can host more than 500 people for a reception or for meeting breaks. It can also be covered for sun or rain protection.

Also, there’s a proposal to build an over-street walkway leading from the center directly into the Rosemary Square district, without having to cross Okeechobee Avenue. It is our sincere hope that it will be part of the outside consultants’ final report on a potential convention center expansion; that report will come out by the end of this spring. 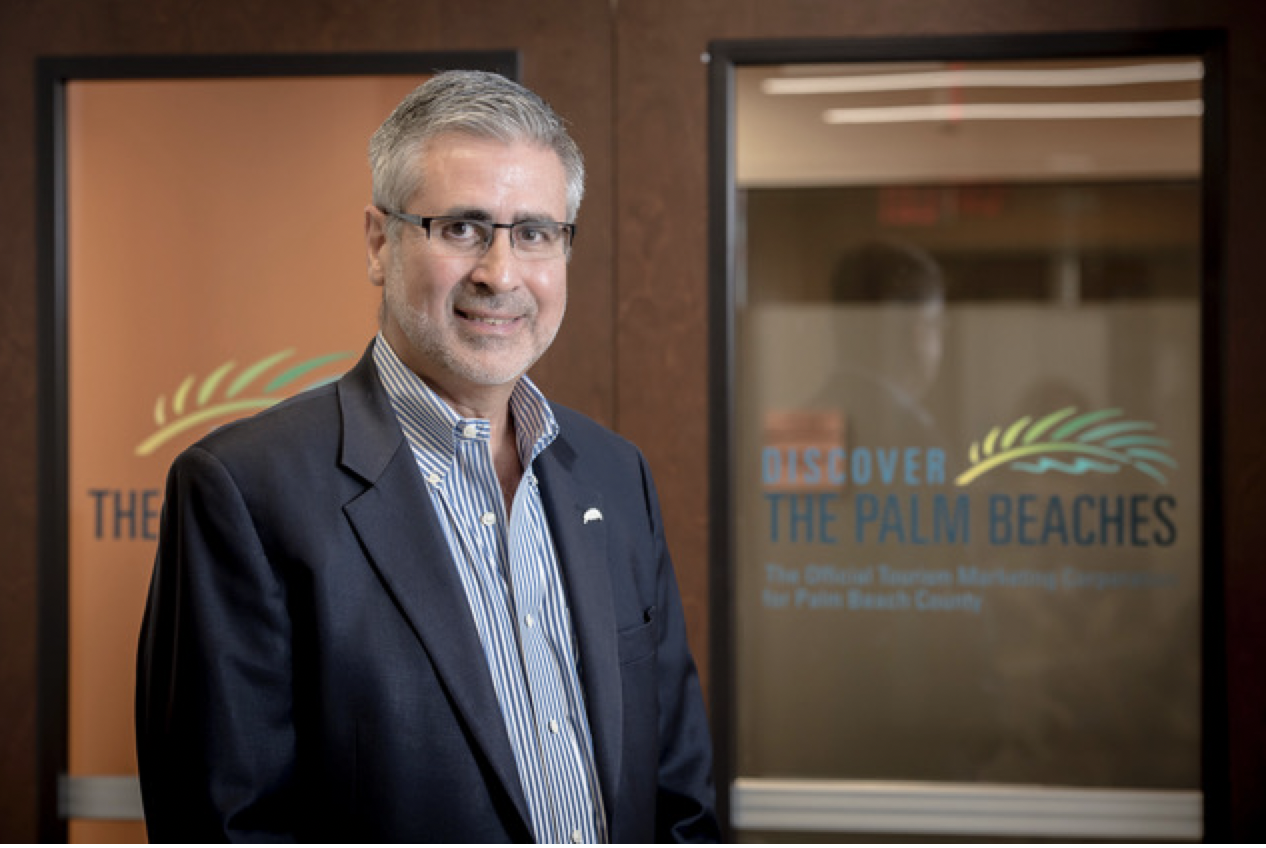 MN: Which industries have a strong presence in Palm Beach County that could boost the educational value of a meeting by delivering knowledgeable speakers and presenters?
Pesquera: DTPB has aligned itself with the economic development arm of Palm Beach County government to create more opportunities in this area. We have a lot of firms in aviation/aerospace, insurance/financial services, healthcare/life sciences, IT/telecom, and environmental sciences. However, the number-one industry in our county is agriculture; it’s even larger than travel and tourism. To the west of the city are thousands of acres of farmland and livestock ranches. We are the largest producer of sugar cane, sweet corn, and bell peppers in the country.

MN: How does that huge agricultural footprint affect meetings and conventions that come to West Palm Beach?
Pesquera: It is easier for us to give planners the food options they need to satisfy all of their attendees than in many other places. These farms are only 30 to 45 minutes away, and many of them specialize in certain crops. For instance, Swank Farms is a nationally known producer of microgreens, and we can have its goods into the center shortly after they are harvested, just like the sweet corn, bell peppers, radishes, and other crops grown here. And with fish, the freshwater options from nearby Lake Okeechobee are just as good as the fish and shellfish we get from the ocean. I recently attended a local event where attendees could watch the chef slice up a freshly caught tuna that became their sushi appetizer—from the ocean to their plate in a few hours.