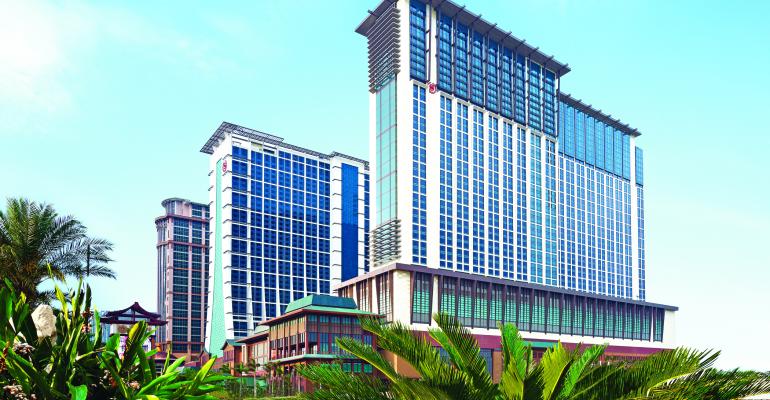 The Earth Tower at the Sheraton Macao Hotel, Cotai Central, brings the property’s total to 3,896 rooms

It is difficult not to get excited when Corinne Janssen describes the new Macao. The director of sales, associations, for the Sheraton Macao Hotel, Cotai Central, brings to life in pictures and words the incredible transformation that sleepy little Macao, settled by the Portuguese but now a Special Administrative Region of China (just like its neighbor Hong Kong) has undergone to become the entertainment and gaming capital of Asia.

Where did they find the space to create Cotai Central, this glittery, glamorous strip of land that rivals the one in Las Vegas? On reclaimed land, of course, says Janssen. The integrated resort offers a total of 9,083 guest rooms in seven hotels, 1.2 million square feet of convention and exhibition space, and 100 restaurants and lounges. The Sheraton Macao became the largest Starwood property in the world with the opening of the Earth Tower late last year. The new tower has 2,067 rooms, bringing the property’s total to 3,896 rooms (the other tower is called Sky), and also making it the largest hotel in Macao.

The Sheraton is interconnected with The Plaza Macao and The Venetian Macao. Guests at the Sheraton have easy access to The Shoppes, a mega-mall with 600 duty-free retailers; the 15,000-seat Cotai Arena; the 75,000-square-meter Cotai Expo; and the 1,800-seat Venetian Theatre.

The Sheraton lends itself well to association meetings or incentive groups midweek, as weekends are quite full with gaming guests. It therefore is an ideal destination for meetings attracting Chinese and other Asian attendees. Convention organizers can even do “citywides,” where five hotels can be used with five different price points, using the Expo Hall as a central convention space.

The Sheraton offers 160,000 square feet of its own meeting space, three pools, three restaurants, fitness center and spa, and a kids club.