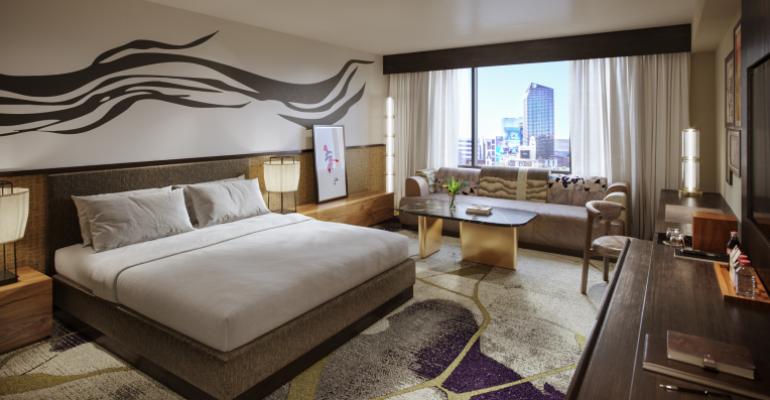 Caesars and Nobu are updating the luxe hotel-within-a-hotel in Las Vegas and expanding the brand to two new destinations.

Caesars Entertainment and Nobu Hospitality are expanding their partnership. They recently announced new Nobu Hotels and restaurants opening at Caesars Atlantic City in 2022 and at Harrah’s New Orleans in 2024, as well as a Nobu restaurant at Paris Las Vegas in 2022. But before any of those developments celebrate their opening day, the original Nobu Hotel Caesars Palace in Las Vegas is getting an update.

A renovation of the eight-year-old Japanese-themed luxury property’s 182 guest rooms and public areas is expected to be complete by the end of the year. Design motifs for the update are collage and kintsugi, the Japanese art of repairing broken pottery with gold epoxy. Quartzite coffee tables with a cracked effect, custom sofas upholstered in a mix of fabrics, and new carpets are among the focal pieces.  Guest corridors and the lobby are also getting new custom carpeting.

The Nobu Hotel Caesars Palace is in a separate tower at the landmark Strip property. While Caesars itself has 300,000 square feet of meeting space, small groups at Nobu can consider the 10,300-square-foot Nobu Villa for special events. The three-bedroom suite includes a large patio, vaulted-ceiling living room, barbecue pit, full bar, Zen garden, and other luxury touches.