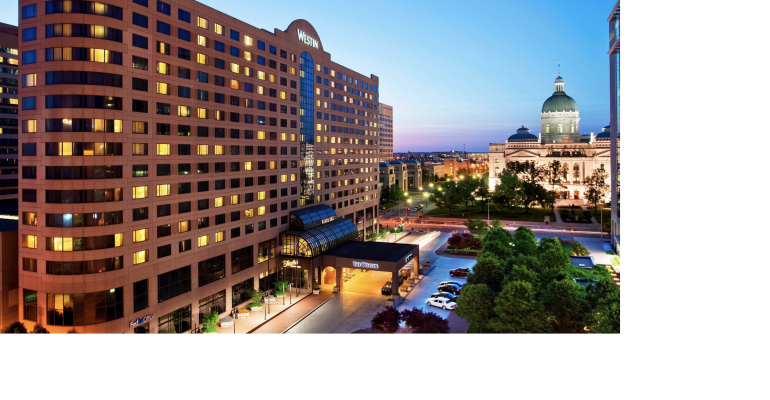 The Westin Indianapolis is refurbishing and adding meeting space and a restaurant while redesigning its public spaces and guest rooms.

The 575-room Westin Indianapolis, connected via indoor skywalk to the Indiana Convention Center and Lucas Oil Stadium, is undergoing a property-wide renovation of its meeting venues and public spaces, a redesign of all guest rooms, and the creation of a new dining venue and additional event space. The project will be unveiled in three phases: the first will come at the end of June, the second in September, and the third in December.

The first phase of renovation includes décor, carpeting, and lighting upgrades to the Westin’s 39,000 square feet of meeting space. Of the 23 meeting rooms, the largest is the Grand Ballroom that measures 16,500 square feet and is divisible by five; it has three dedicated breakout rooms nearby as well. One floor below is the 6,600-square-foot Capitol Ballroom, divisible by three, along with six dedicated breakout rooms.

The new meeting-space décor will evoke the landscape of Indianapolis through greys, neutrals, rusts, and blues. New carpets will showcase intersecting lines to portray the White River flowing through the downtown area, while blackened metal embellishments throughout the space refer to the railroad tracks converging into the city’s Union Station. And the design of the overhead lighting is inspired by Indiana’s agricultural staple, corn. Also making its debut at that time is a new lobby, redesigned to create more usable space and match the aesthetic of the meeting space.

The property’s new bar and restaurant is set for an early-summer debut as well. Ten Hands Social Bar & Eatery will feature a retro-chic style and debut the largest television in the city—made up of 27 screens, it will measure 6 six feet in height and 34 feet in length. Ten Hands Market, a take-out outlet, is next door and will offer soups, sandwiches, pizzas, and pre-made items all made on premises.

In September, the property will unveil a new 3,500-square-foot event space near the Grand Ballroom named Capitol Overlook. Divisible by two, the room will provide panoramic views of the Indiana State Capitol. A new Club Lounge will open at that time as well, serving breakfast daily and snacks throughout the day for VIP guests.

In December, the property’s renovation wraps up with the restoration of all guest rooms. About 380 rooms will have redesigned bathrooms with walk-in showers replacing bathtubs to provide more space. The rooms will have wall coverings, wood accents, and area rugs inspired by the region’s cornfields.

Signia by Hilton to Begin Construction in Atlanta
May 04, 2021