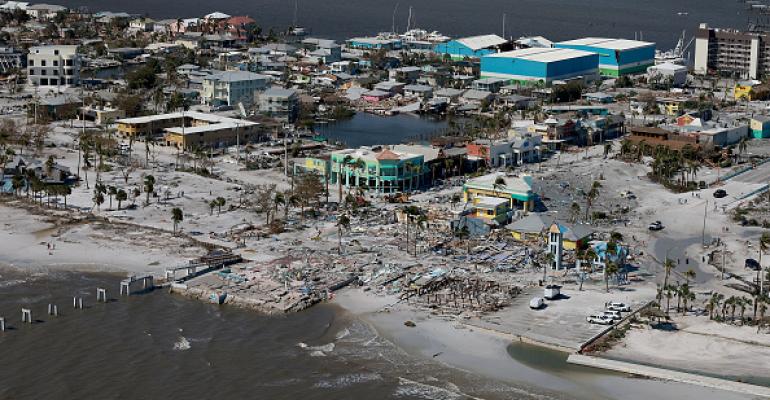 From Naples to Orlando, hotels and infrastructure took a beating that will take some areas weeks, months, or even years to fully recover from.

The hopefulness that came with Florida’s first autumn meetings season after the Covid pandemic was knocked down in dramatic fashion this week, as Hurricane Ian made landfall near Fort Myers on the morning of Wednesday, September 27.

There, the storm delivered 18 inches of rainfall and 140-mile-per-hour winds, resulting in a catastrophic storm surge across the popular corporate meeting and incentive destination of Naples as well as Fort Myers, Sanibel Island, and Captiva Island.

On September 29, MeetingsNet reached Jerry Terp, national sales manager, midwest, for Lee County Visitor & Convention Bureau, who is based in Minneapolis. He told MeetingsNet that “it is too soon for the question [of how badly the area’s business-group hotels were damaged]. At this point, I have no idea. There is very limited ability to hear from staff in our office and people at the resorts. You could check back with me the middle of next week.”

At least one property, the Hilton Naples, a 199-room hotel less than a mile from the beach, remains open. "We are still working on systems outages and internet but taking care of our guests," said Caroline Kissel, national accounts executive.

After making landfall, the storm traveled slowly northeast towards Orlando, Daytona, and Jacksonville, dumping between 12 and 20 inches of rain before moving into the Atlantic Ocean and towards Charleston, S.C.

Because the storm turned east before reaching the cities of Tampa and St. Petersburg, the damage there is expected to be mild to moderate. In a September 29 statement, destination-marketing organization Visit Tampa Bay said that “there are no major damages to the Tampa Convention Center or the downtown core to report. [The storm’s track] meant that much of Hillsborough County was spared from significant infrastructure damage. Evacuation notices have been lifted and power is currently being restored throughout the county. The staff at the Tampa Convention Center has planned an assessment walkthrough for the morning of September 30.”

However, some business groups set to meet in Tampa in the next few weeks are monitoring how quickly recovery might happen across the area’s hotel and meeting facilities as well as its electrical infrastructure. For instance, the Orthopaedic Trauma Association posted a message to its members about its October 12-15 conference set for the Tampa Convention Center:

“We are closely monitoring the hurricane situation in Tampa. A communication will be sent to the OTA membership, Annual Meeting registrants, and industry partners as soon as we have a clear picture as to any damage or circumstances that could impact the OTA Annual Meeting.”

Orlando took a significantly stronger hit than Tampa, with flooding across both the downtown district and the resorts in the Kissimmee area. For instance, a guest at the Walt Disney World Swan & Dolphin Resort posted a video to YouTube of water coming up to the property’s front doors. Other videos showed several feet of water rushing down Universal Boulevard.

Danielle Hollander, chief marketing officer for Visit Orlando, sent this statement to MeetingsNet on September 29: “We have an extraordinary infrastructure of public and private entities working together to resume the region’s operations quickly and safely for residents and visitors alike. Outreach is underway to Visit Orlando’s members and industry partners to assess damage and reopenings.”

At least one convention that was scheduled to happen at Orlando’s Orange County Convention Center in the days after the storm has been canceled. The Association for the Advancement of Blood & Biotherapies decided two days before the hurricane arrived in Florida that its 4,000-person annual meeting set for October 1 to 4 would be replaced by a virtual event in early November, with attendees receiving a partial refund of their in-person registration fee.

On Florida’s east coast, significant flooding happened in Jacksonville, though power outages are reported to be minimal. The next business event to be held at the city’s Prime F. Osborn Convention Center is the Duval County Medical Society’s Future of Healthcare Conference from October 10 to 12. The group’s website makes no mention of hurricane contingencies as of September 29.

Unfortunately, Hurricane Ian was strengthening once again over the ocean and bearing down on Charleston on the morning of September 30, with the mid-Atlantic states in its potential path.