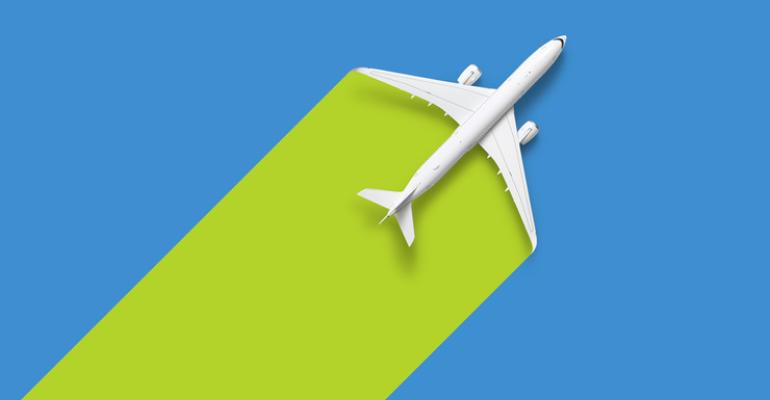 The government’s just-announced Sustainable Aviation Fuel Grand Challenge is a hopeful step toward a future of lower-carbon meetings.

When considering meeting sustainability, air travel is the elephant in the room. Meeting professionals can and should continue to minimize waste, choose eco-friendly venues and destinations, and buy carbon offsets. However, the carbon footprint of gathering hundreds or thousands of people from around the country or the globe is a significant and persistent drag on those efforts.

That’s why the new Sustainable Aviation Fuel Grand Challenge announced by the Biden administration on September 23 is important. In it, the U.S Department of Energy outlines a government-wide strategy for scaling up new technologies to produce sustainable aviation fuels (SAFs) across the U.S. airline industry.

SAFs, made from renewable biomass and waste resources, have a fraction of the carbon footprint of petroleum-based fuels, but are currently more expensive to produce. That is expected to change as demand increases and manufacturing expands. This summer, the European Union took a step toward increasing demand with its mandate that SAF make up two percent of aviation fuel at EU airports by 2025 and five percent by 2030. (SAF can be blended with petroleum fuel.)

The Global Business Travel Association has come out in strong support of the new Sustainable Aviation Fuel Grand Challenge. “SAF will play a critical role in decarbonizing aviation by 2050—but a dramatic acceleration of production capabilities and overall supply is vital,” said Suzanne Neufang GBTA CEO in a prepared statement. “The announcement of the SAF Grand Challenge roadmap puts the global business travel industry on strong footing to overcome barriers for widespread deployment of low-carbon sustainable aviation fuel that can decrease greenhouse gas emissions and shrink the traveler footprint. Thanks to the U.S. Department of Energy, U.S. Department of Agriculture, U.S. Department of Transportation, and its Federal Aviation Administration, and the U.S. Environmental Protection Agency for leading the effort through research, development, and demonstration to meet SAF roadmap goals.”

The Department of Energy’s overarching goals with the SAF Grand Challenge are to “reduce the cost, enhance the sustainability, and expand the production and use of SAF.” It is aiming for SAF with a minimum of 50-percent reduction in greenhouse gas emissions compared to conventional jet fuel. (Some SAFs are believed to emit 80 percent less than traditional fuel.) To meet 100 percent of U.S. demand for SAF by 2050, the DOE hopes to hit a target of 35 billion gallons per year by then (with an interim target of three billion gallons per year by 2030).