Amway attendees had the chance to check out the amazing Big Freeze 360-degree camera experience at their closing celebration at the National Air & Space Museum. The array takes stop-motion photographs à la “The Matrix,” creating an unforgettable meeting memento.

Two Years of Planning—then a Scramble

When the idea of using the U.S. Capitol as a general session venue had to be scrapped only two weeks before the event (the unique setting had been booked through an Amway connection, but ultimately could not accommodate the necessary setup time), Hosts DC was faced with scrambling for an alternate venue. Since Erica Gibbons and Kendra Thalman had already been living and breathing the program for two years, placing and releasing dozens of holds in the process, they knew what was available in D.C. and that only a couple of options could meet the requirements. “The stage and production are so important for their business meeting,” Gibbons explains. Fortunately, the Mellon Auditorium was available and Hosts had shown Amway the venue previously so an additional site visit was not necessary.

What was necessary in order to use the Mellon Auditorium for the Amway business meeting was to essentially obliterate two of the center’s biggest selling points—its soaring windows and its natural light. Custom blackout curtains created the necessary dramatic ambience for the company’s presentations. Another scramble: At the U.S. Capitol, permanent translation booths are on site. At the Mellon, Hosts had to find a place for them—which ended up being the green room, the area where Hosts staff, Amway staff, entertainers, and the production team from Crossfire Productions ordinarily would be.

At its Pinning Reception, Amway fully embraced the natural light flooding into the United States Institute of Peace. Images of doves and clouds were projected on the white walls of the venue. Madeline Albright address the audience on the topic of global business and leadership.

Maintaining the airy, serene ambience of the U.S. Institute of Peace, table décor included hand-painted runners and succulent-filled terrariums. The evening ended with dessert on the roof, which overlooks the Lincoln Memorial.

The International Language of Music

A string quartet welcomed guests with contemporary music from a glass bridge in the U.S. Institute for Peace. Music and visual imagery play major roles throughout the entire Amway event because attendees come from 13 countries and speak many different languages.

A Sense of Place

Offering a sense of place: The dining setup at the National Museum of the American Indian, a venue honoring America’s roots and the one event where F&B was given an American emphasis. Video imagery of horses and sunsets was projected overhead as guests took their seats at tables whose décor was inspired by earth, air, fire, and water.

Guests were led into the welcome reception at the National Museum of the American Indian by a Native American drum circle.

Dinner at the Smithsonian Castle commemorated the company’s past while looking toward the future. Costumed characters served dual purposes, as entertainers and as directional assistants, keeping the evening on track time-wise. Two men were dressed as rabbits with large alarm clocks that went off when it was time to move from reception to dinner. The attendees “linger a lot,” Erica Gibbons says, and visual cues are critical for moving this multilingual crowd along. (They’re also a lot more enchanting than banging a gong, she notes!)

The items under the glass all subtly celebrate Artistry, Amway’s beauty line, explains Hosts GM Erica Gibbons. “Each centerpiece was thoughtfully created by Ohms Design from different items, several of which are actual Artistry products reconfigured/painted, as well as artifacts from the 1950s, when the brand was created,” she notes. The style in which the pieces are displayed—as a “collection”—was an intentional echo of the Smithsonian Castle, which is itself a “collection of collections.” The Castle is about all of the Smithsonian museums, the curation process, the art of collecting, etc., in addition to serving as headquarters for the organization. All of the week’s centerpieces were designed by Kim Ohms of Ohms Design, who has worked with the Amway brand for many years.

The colors of the brand Artistry, Amway’s beauty line, are black and gold. The color scheme was picked up for the table décor at the Smithsonian Castle events.

Paparazzi With a Twist

Steampunk paparazzi welcomed guests to the Smithsonian Castle along a red carpet. The troupe of costumed entertainers, sourced by the design team, also featured ballerinas dancing atop life-sized music boxes, and a violinist playing while a living wind-up doll sang.

For a dinearound, Hosts Program Coordinator Kendra Thalman searched far and wide for restaurants with the appropriate styles of cuisine, where the food was created and served at the highest level. Some of the restaurants were outside D.C., in Virginia and Maryland. (Pictured, a gorgeous plate from Korean restaurant Woo Lae Oak in Vienna, Va.)

Kendra Thalman of Hosts spent a lot of time talking with the staff at each restaurant chosen for the Amway dinearound, explaining that each group would be traveling with a video crew plus Amway staff and interpreters. Hosts staff were on site at each venue as well, she notes. Nothing was left to chance! (Pictured, Fiola Mare, an upscale Italian seafood restaurant in Washington, D.C.)

And the energy takes off! Amway’s closing reception at the National Air and Space Museum was fun and lighthearted, featuring dancers in vintage airline costumes performing a flash-mob routine.

Creative Ways to Move a Crowd

Staff in moon-men outfits, parachutes, vintage airline costumes, and pilot gear handed out glow sticks as they led guests from the vintage-flavored reception to the futuristic dinner area.

Delectable options were plentiful the closing reception at the National Air and Space Museum. Amway is exacting about its F&B, and this event featured the largest spread of the meeting—buffets with French, Italian, Korean, and Chinese selections. Hosts, Amway, and the caterer spent months going through every detail. “Amway knows its people so well,” Erica Gibbons says. And the company is careful to track what works and what doesn’t for future planning.

At Amway’s closing event, desserts were presented on a “baggage carousel,” ready for plucking! 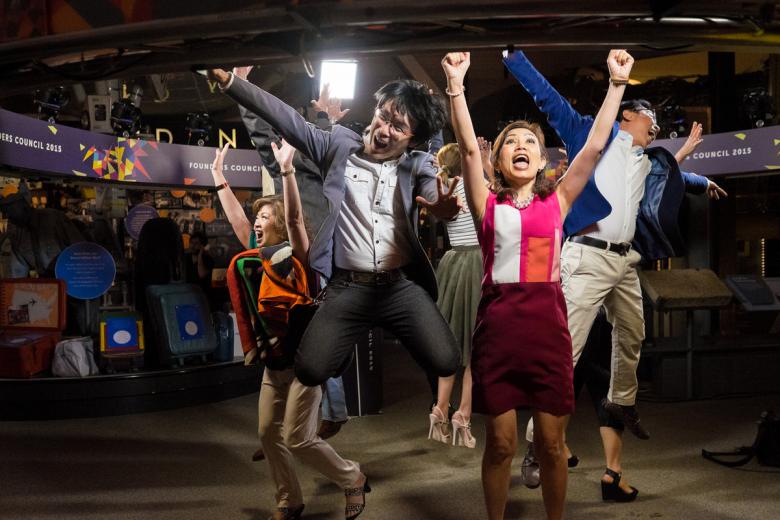