ADVERTISEMENT
Just Released!
Meeting Policy: Write it and They’ll Use it

The study found that more than two out of three life sciences companies—70 percent—have a formal meeting policy. And when that policy is in place, a whopping 92 percent of administrative assistants use it.

There was a 26 percent jump in the number of companies that report having a formal meeting policy compared to a similar study two years ago: 70 percent in 2015 versus 44 percent in 2013. The comparison isn’t apples to apples, however, because the 2013 study surveyed companies across numerous industries while this survey focused on life sciences companies, a niche that may have more evolved meeting management practices than the industry as whole.

The AEME study found that meeting policies typically include language around

• who may approve a meeting (89 percent)

• when preferred suppliers must be used (84 percent)

In a similar study in 2013, only 61 percent of respondents had a policy that addressed the use of preferred suppliers.

Of the 118 managers surveyed, 54 percent said that administrative assistants handle more than half of their organization’s meeting planning. And according to the admins, it’s a hefty portion of their jobs. They report spending, on average, more than a quarter of their time (27 percent) on meeting and event planning.

Administrative assistants at more than a quarter of life sciences companies surveyed (26 percent) say they personally sign contracts for hotels and food and beverage. That seems to be a key area of misunderstanding that the AEME study has uncovered because only 6 percent of the managers surveyed say that the administrative team is responsible for signing contracts.

Sixty percent of the 118 managers surveyed “agree” or “strongly agree” that meeting risk is mitigated properly at their organization. However, AEME characterizes the low percentage of companies that have reviewed their meeting processes in the past year as “more than concerning”:

• 36 percent of managers do not know if any legal, financial, or procurement teams have reviewed meeting processes in the past year.

• 23 percent are sure there has not been any review of meeting processes in the past year.

“Building in a culture of meeting process and regular review is paramount,” states the whitepaper, “particularly in many of the life sciences industries where there are additional complexities and requirements in play such as the Sunshine (Open Payments) Act.”

Too Much Old-School Tech

Among respondents, Microsoft Office is the most common technology used for handling meeting tasks, such as budget management (57 percent), RFP management (37 percent), and tallying metrics (42 percent). The whitepaper urges life sciences companies to invest in meeting-specific technologies, which are more efficient and capture meeting data in a central location.

Who You Gonna Call?

Only 60 percent of respondents report having crisis preparation guidelines for meetings. The resources available to administrative assistants and managers for crisis situations are:

What to do with these results? Issa Jouaneh, senior vice president and general manager, American Express Meetings & Events, says, “With this knowledge, companies can review their policies and determine the appropriate courses of action to minimize risks, balance the attendee experience, and the focus on realizing the business objectives of their meetings and events.” 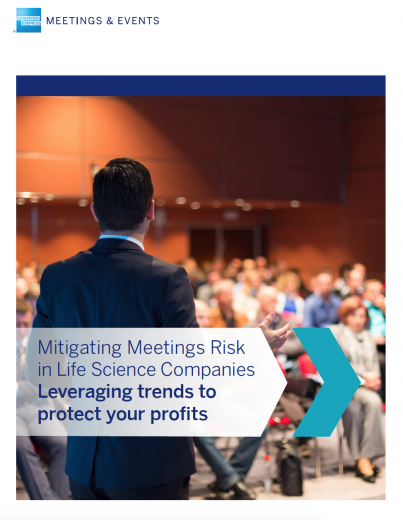 Next Up
On the Scene at Pharma Forum 2018
Start Slideshow ›