To highlight the idea that any time of year is right for meeting in Columbus, Convening Leaders’ opening reception had distinct zones highlighting each season through specific décor and F&B offerings. Welcome to winter.

Winter’s Not Done Yet

The giant rotating snowman welcomed everyone to the winter-themed area to enjoy warm dishes and drinks.

This was perhaps the most popular area of the reception, abundant with shades of brown and copper plus tall scarecrows wandering around for photo ops.

Many attendees felt in touch with the spirit of autumn during the opening reception.

Acrobats performed above the crowd alongside beach balls hung from the ceiling, while beachy food trucks offered up light fare as well as ice cream treats.

Plenty of light colors and bright flora, along with seasonal food and beverage, brought the reception’s spring-themed section to life.

Performers on stilts wandered through the springtime space and happily posed for photos.

There’s Always Room for One More

Friends old and new posed with the giant swinging bench in the middle of the reception floor.

The Coffee Comes to You!

Mobile coffee servers from promotional marketing firm Two Birds wandered the prefunction space each morning to make it as easy as possible for attendees to fuel up before breakout sessions, compliments of the Miami CVB.

The Show Floor’s Gone to the Dogs

A local dog shelter brought a few of its best-trained residents to the exhibit hall so attendees could mingle with them.

Basking in the Retro Vibe

The Spazmatics, a collection of campy characters who are also terrific musicians, played ‘80s hits for the more than 1,500 folks who attended PCMA’s Party with a Purpose, which raised money for the association’s educational foundation.

To make its main stage most impressive, PCMA set it against the long side of the Columbus Convention Center’s largest ballroom and used risers for additional seating in the back of the room to accommodate all 3,300 attendees. This photo was taken from the riser seating.

A View from the Other Side

Here is what presenters saw from the stage on the exhibit-hall floor.

During lunch on the exhibit-hall floor each day, several stations were set up so attendees did not have to sort their waste into recyclable and non-recyclable bins—they simply left it on the table. There, foodservice staffers did the sorting so that the waste-management efforts were most efficient.

Several months ago, PCMA commissioned members in three cities to create different parts of a large mural that was unveiled at the show. The theme of the three-part piece is meant to inspire the events industry after its difficulties during the Covid pandemic: “Hope, Unity, and Resiliency.”

A Bird’s-Eye View of the Closing Reception Set-Up

Nationwide Arena was the setting for the final-night event, a mash-up of fashion and music that saw an elevated runway on one side of the floor (at right) and the music stage at the far end.

Another View of the Reception Space

The white backdrop to the fashion runway is on the right, while the featured musical performer is on the main stage to the left. But who was that performer? See the next photo.

Singer John Legend, a Columbus-area native, delivered a one-hour performance at Nationwide Arena that kept all 3,000 attendees on their feet to cheer and sing along. Tim Walsh of Discover Newport, R.I., got a front-row spot and took this terrific photo. 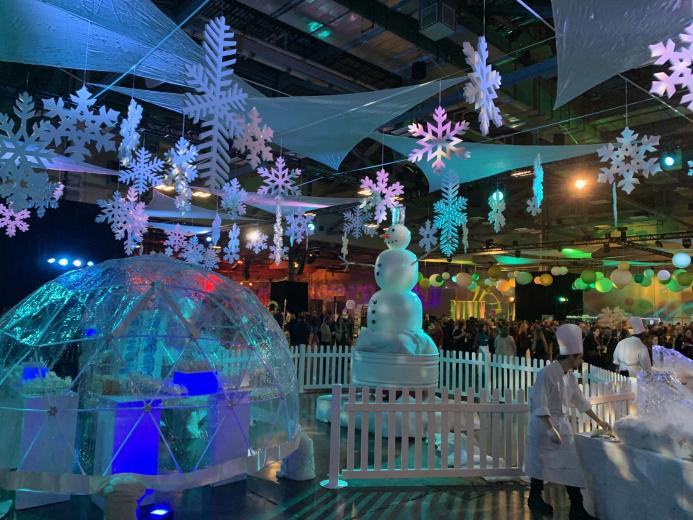 Next Up
What’s Catersource + The Special Event, Anyway?
Start Slideshow ›