ADVERTISEMENT
The Blueprint, from Above

While the National Football League used the inside of the 550,000-square-foot Caesars Forum (at far left) for its Fan Experience activations, the master plan called for using the 100,000-square-foot outdoor patio, the adjacent parking lot, and a public road separating the venue from the Westin Las Vegas Hotel & Spa as usable space for the actual draft stage, F&B outlets, and even more activations.

Built in the Caesars Forum parking lot was a temporary structure featuring the draft stage. About 1,500 people could fit inside, keeping them out of the Vegas sun for the three-day affair.

Calm Before the Storm

Here's how the stage looked right before league officials, drafted players, media, and fans entered the venue on Friday, April 28.

If business-event planners are able to get their attendees as riled up as this guy, then they have succeeded magnificently.

A Bird's Eye View of the Festivities

As the sun set on day 1 of the NFL Draft, the area outside Caesars Forum (at left) was bustling.

For the various musical acts that would perform during the three-day event, the NFL erected a stage atop the lake in front of the Bellagio Hotel that faced the Strip.

Selected fans were able to meet former NFL greats early each day on the Bellagio stage, where they mingled and got autographs. The walkways to the stage were built from the sidewalk on the Strip across Bellagio's lake.

Here's the view of the stage over the lake at Bellagio from the high-rise hotel next door, The Cosmopolitan.

The NFL Draft was not the first event to use a stage built atop Bellagio's lake. A few years back, the band Panic at the Disco performed a set on a smaller stage, with the fountains gushing behind them. 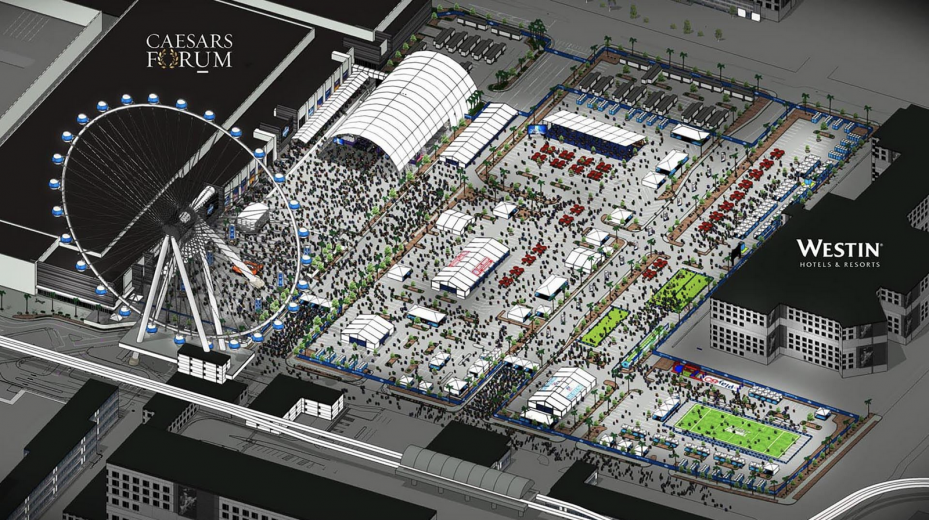 Next Up
Innovative Engagement Strategies at IMEX America
Start Slideshow ›