ADVERTISEMENT
Out of the Park
Digital Blue Photography

“The NFP Strategy Summit is a networking and educational conference that seeks to motivate, inspire, and engage,” says Natalie Burge, associate creative director. “It is really about a network of professionals gathering to share best practices—to learn from each other and from industry leaders in breakout sessions and main platform presentations.”

Burge and Todd Zint, CMP, CMM, vice president, meetings and event strategy, have produced the conference since the disparate groups were first combined several years ago. Building upon lessons learned each time, their process and their ideas have evolved until this year, Zint says, “we hit everything out of the park. Everything represented a reimagining of the traditional way of doing things.”

The NFP marketing team was thrown a curveball as they were planning the 2016 Strategy Summit—a corporate rebranding, parts of which would be ready for unveiling at the same time as the conference. While building out the deliverables for that project, explains Natalie Burge, associate creative director, “we also needed a conference graphic identity, type treatment, and theme to put on all the pre-conference and on-site materials and signage. She challenged her teammates to “dig deep” for a theme that would really reflect the company’s philosophy—“it’s personal”—and that could bridge the gap between employees who “live and breathe NFP” and attendee groups who interact with NFP on a more infrequent basis. The result: Uniquely Us. The theme acknowledged the individuality of each attendee as well as the one-of-a-kind company that NFP is. Combined with an event logo based on a thumbprint—everyone has one, each is unique—and the company’s new, more vivid color palette, the theme provided a fresh, updated look and feel on site and in all the conference communications.

“From a marketing perspective, Todd and his team always work with an eye toward making everyone feel part of one group—part of the bigger picture,” says Natalie Burge, associate creative director at NFP. Todd Zint, who is vice president, meetings and event strategy, agrees. “Like my meeting planning peers, I am always aspiring to work toward reaching corporate goals, not just fulfillment.” One way he has been able to do that is to run a monthly stakeholder committee meeting, bringing all channels together and doing a “round robin of opportunities and challenges” where the content and characteristics of sessions are discussed, along with how individual business lines’ needs and objectives coalesce with the overall conference goals. On site, this idea of an individual, “personal” place within the larger company was symbolized by the color coding of sessions targeted to particular business lines. Each color was part of the overall cohesive palette, but indicated a specific track to follow. (Shown above, red indicated the Partners Financial track.)

“Our CEO is passionate about charitable giving,” Burge says, but this year was the first time the team incorporated a charitable element into the conference. Again, they dug deep and went beyond the expected activity or donation options.

“There is a trend in the business world of wearing fun socks—nontraditional patterns and colors—with business suits,” Burge explains. The team took the idea and ran with it, designing a pair of bright, striped socks with the new NFP colors and logo, and selling them at a kiosk in an unused but highly trafficked part of the meeting space. “We related the sock design to NFP being unique and not stodgy. We sold them for $15 a pair. It was a shot in the dark. We thought we would try it as a test this year.”

The test was a runaway success. “We sold out in the first two days. People were changing their socks on the spot.”

All proceeds went to Project Sunshine, a nonprofit organization that provides free educational, recreational, and social programs to children and families living with medical challenges. “This initiative fit the spirit of our company: intentional, meaningful, thoughtful.”

Welcome to the Office of the Future
Digital Blue Photography

Some unique elements added spark to the broker/dealer trade show, such as the Office of the Future, which showed innovative concepts in an imagined futuristic work environment. “The goal was to expose the audience to the notion that if they are not taking steps to modernize their practice, if they are not incorporating technology and nontraditional work environments into their firms, they will be left behind,” Burge says. “It was showing them how to elevate their practice and how to be successful in nontraditional environments.” Home-office staff demonstrated scenarios such as a producer and a client each having an iPad and following along the same presentation.

If there’s one thing you can count on in corporate America, it’s boring head shots. At a headshot station at this year’s summit, the photographer encouraged attendees to add a little attitude to their poses. “This new headshot style is consistent with our refreshed brand. We are a company that is built on interpersonal relationships, and personality is a big part of that,” Burge says. “We encouraged everyone to express themselves, and not do the standard mug shot.” After the meeting, a member of the NFP marketing team placed the shots against a bright background of the new color palette

NFP launched its conference app in 2011, and adoption has grown year over year. It was slow at first, but this year saw a significant spike, with an 88 percent increase over 2015 in the number of attendees downloading the app.

“It’s interesting to see the adoption year over year,” Burge says. “It started slow, people didn’t get it. But with smartphones becoming ubiquitous, app adoption increased. When first introduced, it was challenging to navigate; now it is more intuitive. We’ve been plugging away and really pushing it. All the info you need is right there at your fingertips.”

In fact, Zint adds, what is today the “solutions desk” used to be the help desk when the app was launched. Now it has evolved to become a place where NFP demonstrates new products and online tools. Individual “demo stations” are placed near the solutions desk as well, along with charging stations.

The transition day gave an opportunity for Douglas Hammond, NFP’s chairman and CEO, to address the entire audience, which also included home office executives, NFP staff, and insurance carriers and other sponsors.

As with many large, mission-critical meetings, the NFP Strategy Summit requires both complex staging and production for its general sessions and more straightforward audiovisual equipment for breakout sessions. Todd Zint has developed a “hybrid” solution for sourcing the conference’s needs, using an outside production company for the general session and a hotel’s in-house AV staff for the breakouts. “It streamlines costs to use our preferred production company for the mainstage platform,” he says. “It also provides continuity, so our execs are working with the same crew and producers every time.”

He also negotiates “static” in-house AV rates, meaning that, if he uses the same setup in a breakout room for five days he negotiates a flat rate rather than paying a daily rate, which would include daily setup and breakdown fees. It’s important to work on these fees early, he says. “The greatest leverage you have is at the time of negotiating the general hotel contract.”

He also prefers to use the in-house AV for part of the conference because it creates a better rapport with the AV team, whom planners invariably interact with at some point even if they aren’t providing all the equipment and services. It also can mean reduced travel costs for the outside production vendor if they don’t have to focus on the cookie-cutter breakouts. “Even though on paper the in-house AV vendor often is more expensive, it is not necessarily the case in practice,” he says.

Here is the the Omni Dallas ballroom entrance during the day. A bright blue background, sponsor logos, and channel messaging welcomed attendees into the trade show. See the next photo for its transformation.

By using the same ballroom entrance structure but swapping out the panels, organizers traded the business blue for the deep red glamour of the James Bond party theme. The area was given an entirely different feel—far less expensively than with totally new décor.

Sponsors at the trade show held during the first wave of the NFP Strategy Summit got ample time with attendees. “We want to maximize the engagement opportunity between attendees and sponsors,” Zint says, so all meals were set up on the show floor. Then, in “a four-hour flip” on the second day of the conference, he explains, the trade show became the setting for a themed networking event. Lower-end sponsor booths got dismantled and turned into the stage area, while the bigger sponsors kept their booths open during the event and even had the option of transforming them to align with the theme (this year: James Bond). “It encouraged people to walk around to see how various sponsors incorporated the theme into their booth space,” Burge says, “so sponsors got more face time with attendees.”

“We don’t bring a full execution team to the meeting,” Zint explains. “We’re a lean group with specific job responsibilities on site.” Local professional temps work at the registration desk, do session scanning, and perform other tasks. “By leveraging these temps (18 this year), NFP saves a tremendous amount of money on travel and hotel expenses.”

Todd Zint negotiated a digital display of the company’s logo covering the side of the Omni Dallas. Some attendees mentioned seeing it as they flew into the city. 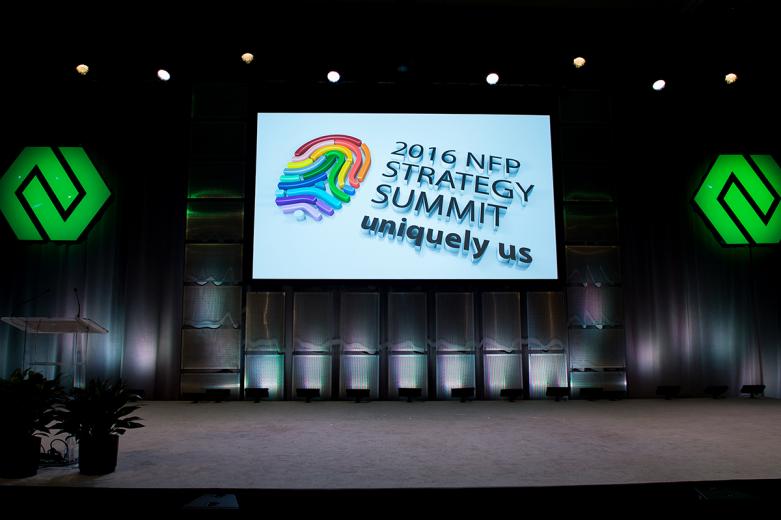