The RevUp Dive Bar (the name came from the 2015 Cambria theme) presented guests at Cambria’s exclusive reception a comfortable and relaxed atmosphere. Attendees “expect a fun event that engages them and still allows them to socialize and network,” says Tony Smith, brand planning and implementation, Cambria hotels & suites, and Michael Lusick, vice president, upscale brands, Choice Hotels. “The energy of this event is driven largely by the fact that each year the event theme and concept changes, so our attendees have come to expect the unexpected.” This event won the 2016 Achievement Award for Best Innovative Event between $50,000 and $100,000 from the Association of Destination Management Executives International.

Cambria wanted guests to really engage with each other at the event, so the RevUp Dive Bar was full of games such as pool, pingpong, and foosball. This group, says Aubrie Jones of Hosts Las Vegas, “is competitive, and they’ve come to expect these types of events, with some fun internal competition.” But you can’t always rely on guests to get things rolling, so Hosts brought in an emcee “to keep the momentum and the energy going,” Jones says. “Our emcee has a teambuilding background so he got the crowd really involved. We definitely picked the right talent.”

True, the setting was a dive bar, but awards are given out at this reception and the guests are often dressed up, so it’s important to give them the feeling that they are part of something exclusive. Hosts and the Cambria team decided to create the bar entrance inside the ballroom, behind black truss and drape, so only the invited guests got a look behind the curtain. Awesome idea, but it also added to the logistical challenges. “These days it’s the norm to have tight timelines,” says Aubrie Jones. “And with draping, there is much more approval and pre-planning needed by all parties involved. The fire marshall will be on site checking that doors have proper headings and that you have the required fire retardant certificates on site with you for the draping.” From the viewpoint of Tony Smith and Michael Lusick, “The biggest win with the Hosts Las Vegas team is that you can rely on them to turn your vision, no matter how complex, into reality and execute a flawless event. This is a testament to their detailed preparation and great relationships they have developed with their vendors and partners in Las Vegas.”

The back corner of the ballroom featured a 16-foot L-shaped bar accented with wood and brick wall panels with mounted flat-screen TVs that added to the dive bar ambience. The design was thoroughly thought-out. “This was a group of hotel people at a hotel convention,” says Choice's Michael Lusick. “Hotels are a 24/7, 365-day-a-year business. With the help of Hosts Las Vegas, for a couple of hours we were able to transport them to a world where their biggest worry was what game they were going to play first. We had over 185 guests attend our event, which was rated one of the best of the week.”

An elevated area featured pool and air hockey tables intermixed with silver conversation pub tables and high cocktail tables with bar stools. The pub game competitions were televised on large screens for both spectators and participants to enjoy. Just off the elevated space was a parquet dance floor.

Functioning as both décor and entertainment, the main focus of the RevUp Dive Bar concept were the pub-style games. Games included pinball, double shot basketball, putting challenge, dart boards, old-school arcade games, NASCAR racing games, and more. Oversized signup sheets were placed near each gaming section and strolling referees encouraged guests to participate in the competitions. Additionally, guests were given a “passport” upon arrival, and were encouraged to visit and play each game in order to get passport stamps. Full passports were rewarded with RevUp swag at the end of the night.

The image above shows the idea and the execution. “Here’s on paper what we want it to look like. At the end, here’s what it did look like,” Hosts Las Vegas President Josh Jones, DMCP, explains. “And in between were partnerships with the hotel, with Choice, with the AV team, the unions…” Coordination and communication were what made this even successful, he says. “The right hand knew what the left hand was doing, and we were able to manage any changes that came up.”

Creating a realistic dive bar in a ballroom posed several challenges in the pre-planning and on-site processes, says Aubrie Jones. “The entire ballroom space was draped in black in order provide a more realistic dive bar surrounding. The exclusive entrance treatment also required intricate draping. Entrance doors needed to be considered in the draping process to allow for servers to enter and exit the space safely without jeopardizing the overall vision of the event yet still fall within all fire code requirements.”

“We successfully transformed a traditional convention meeting space into an upscale dive bar,” says Tony Smith of Cambria. “Every detail, from the design, food & beverage, and service supported the theme.”  Food stations ranged from elevated choices such as lobster tacos to pub fare like mini cheeseburgers.

A food station at the RevUp Dive Bar. Creating this event “required careful pre-planning with all potential vendors as well as collaboration with the hotel to transform the ballroom space,” says Aubrie Jones. In the end, Cambria got the buzz it was looking for, she says, and guests stayed around until last call. The Choice team adds, “One guest noted that in her 25-plus years of attending industry events, this was by far the best she had attended. We received overwhelmingly positive feedback from this event and several people said they can’t wait to see how we top this event next year.” 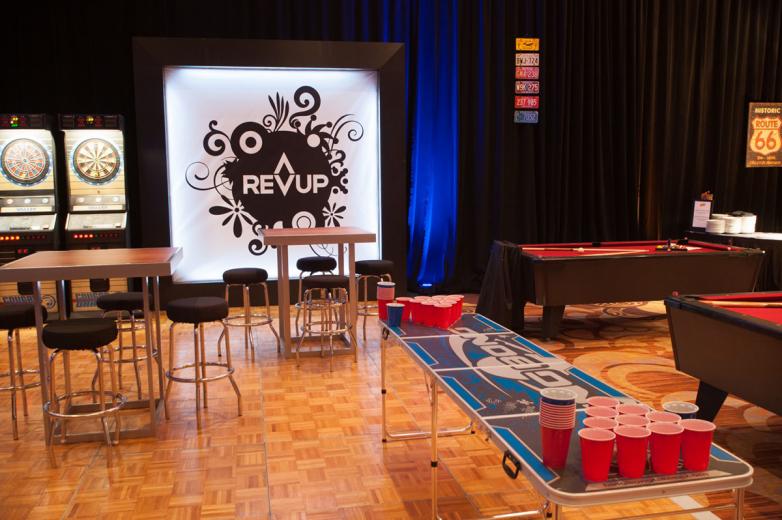 Next Up
Kinetic Keynotes
Start Slideshow ›