ADVERTISEMENT
Flocking to Frankfurt for IMEX 2016

IMEX Frankfurt welcomed nearly 9,000 hosted buyers to the 14th edition of the meeting and incentive trade show, held April 19–21 in Frankfurt, Germany. Exhibitors from around the world held 57,000 individual appointments with buyers. Education programs were sprinkled throughout the show floor as well, and a full day of education—with specific sessions focused on association planners and others on corporate planners—took place April 18, the day before the show opened. The next IMEX Frankfurt is set for May 16–18, 2017; first up is IMEX America, taking place in Las Vegas October 18–20.

More than 40 politicians from around the world met with some 80 meetings industry leaders at IMEX Frankfurt’s annual Politicians Forum. Before the meeting, they were given a guided tour of the IMEX trade show and visited their own national or regional stands. Hon. Minister Stuart Ayres, Minister for Trade, Tourism and Major Events for New South Wales, Australia, delivered the keynote address on the importance of coordinating business events and meetings industry strategy with trade, investment, and export policies. Following his presentation, the Global Exchange of Future Practice was moderated by Michael Hirst, Business Visits & Events Partnerships, U.K. Over the years, said IMEX Group Chairman Ray Bloom, the Politicians Forum “has played a powerful role in advancing understanding of the meetings industry among political leaders, enabling them to appreciate that investment in conferences and meetings can bring major economic development benefits, from income and employment to inward investment, education, and scientific advancement as part of the knowledge economy.”

This year’s IMEX Frankfurt considered the whole person, not just the business person. Its Be Well Lounge was created by InnerSense and sponsored by Weichlein Tours + Incentives and the Munich Convention Bureau. In addition to providing a place for attendees to recharge away from (but nearby) the buzz of the show floor, the lounge featured full days of programming with yoga and guided visualization and relaxation sessions. Also on tap this year was the IMEXrun, sponsored by Rio de Janeiro and attracting an amazing 800 participants.

Business School With the Outthinker

Adviser, author, and former McKinsey consultat Kaihan Krippendorf (pictured) led the Professional Convention Management Association Business School April 18. Held at IMEX America in 2014 and 2015, this was the first PCMA Business School to be held at IMEX Frankfurt. Krippendorf approached his topic, “Outthink the Competition,” by having the packed session room work together on brainstorming projects. “The way innovators think is different,” he said, citing Ghandi as the one who explained it best: “First they ignore you, then they laugh at you, then they fight you, then you win.” The idea is to go beyond the obvious options straight on to the laughable option.

Read our full article about the workshop.

Jointly run by the Green Meeting Industry Council and IMEX, these awards recognize organizations within the meetings and incentive travel industry that minimize their environmental impact and maximize their social contribution. The 2016 winners: Greenbuild 2014 International Conference & Expo, the world's largest conference and expo dedicated to green building, won the Green Meeting Award; Banyan Tree Mayakoba, for its incentive trip “Bee Part of the Melipona Community,” enabling delegates to work with locals to help produce honey soap from the Melipona beehives, won the Commitment to the Community Award; and the Levi’s Stadium won the Green Supplier Award for environmental initiatives covering energy efficiency, waste minimization and water conservation.

SITE Nite Europe was held this year at the Kameha Suite, an elegant villa located beside the Frankfurt Opera House. More than 350 SITE members, IMEX hosted buyers, and other colleagues were welcomed at the celebration by event co-chairs Padraic Gilligan, Sool Nua, and Marina Parra-Flechsig, Weichlein Tours + Incentives (pictured). SITE CEO Kevin Hinton was active at IMEX Frankfurt 2016, reinforcing SITE’s current messaging campaign, “Incentive Travel Works” (and its snappier version, “It works”). Hinton participated in the IMEX Politicians Forum for the first time this year. “I said I was proud to be representing the incentive sector, the highest-spending of the MICE segments on a per-delegate basis. But because it looks like leisure travel, it gets misperceived, so that’s our challenge internally and externally. My vision for 2030 is that all destinations understand that incentive travel is an investment in human resources. It’s companies investing in their own people, keeping people engaged. It works.”

Serving up some amazing burgers from a replica food truck at the NurembergConvention stand at IMEX Frankfurt (from left): Sabine Linke, Nicolao Fröba, Stefan Gögelein. Food trucks are a worldwide trend now; “Mr. Food Truck Germany” and Nuremberg resident Klaus Wünsch is credited with launching the industry in Germany with his “ribwich” truck way back in 2010. Now he runs an app for people to find, order from, and rate food trucks. And he organizes more than a dozen Food Truck Roundups all over Germany. Also, Nuremberg Convention Center played host to the Street Food Convention, billed as the world’s first b-to-b convention for food trucks, in 2015. The show returns in November, co-located with BrauBeviale, the international equipment exhibition for the beverage industry with a focus on artisanal beer brewing.

Awarding Those Who Give Back to Meetings and Incentives

The SITE Master Motivator Award was presented to Carolyn Dow, managing director, The Dow Consultancy, in Edinburgh. In presenting the award, SITE CEO Kevin Hinton described Dow as “someone who upholds excellence, exudes energy, possesses a collaborative spirit, and embodies the values of SITE, which she joined in 1987.” Dow served as president of SITE in 2001 and as director for SITE Europe from 2006 to 2009. She spend much of her 30-year career in the industry as head of sales and marketing for the Scottish Convention Bureau.

Brand-new president and CEO of the Destination Marketing Association International Don Welsh said one of the first things to land on his plate was to help choose the recipient of this year’s DMAI Humanitarian Award. Destination DC earned that distinction, represented at the IMEX Frankfurt Gala by Elliott Ferguson, president & CEO. Through its charity the American Experience Foundation, Destination DC offers free trips to D.C. for low-income eighth-graders nationwide with the goal of providing experiences to teach and inspire the next generation of hospitality industry professionals. Pictured (from left): Don Welsh, Elliott Ferguson, and Ray Bloom, IMEX Group

NAO is a humanoid robot, created by the Paris-based company Alderbaran, who was on hand to greet visitors at the German Convention Bureau booth at IMEX Frankfurt. NAO has already been used in a hospitality application—as an automated concierge, greeting hotel guests and providing information in many languages. See more about what some of the 7,000 robots sold so far are doing at NAO’s website.

Evening networking events are an important part of the IMEX Frankfurt experience as well. Just one example was the Italian Kitchen Party sponsored by Rocco Forte Hotels at its stunning Frankfurt property, Villa Kennedy. Guests wandered amid chefs, really getting in their way throughout their professional kitchen, while picking up plates of Italian delicacies such as the tenderest white asparagus (in season in Germany) bathed in melted butter (pictured). This was a truly immersive experience, and a special opportunity for attendees to go behind the scenes, watch the food preparation, and ask questions of the chefs.

Giuseppe Lepri, of Milan-based destination management company AmandaEventz, and Alison Hall, MeetingsNet, were among those celebrating the 25th anniversary of the SITE Italy chapter at SITE Nite Europe April 18. Lepri and other SITE Italy chapter members and executives cut an anniversary cake and presented a donation from the chapter to the SITE Foundation to support its mission of enhancing the awareness and effectiveness of motivational experiences and incentive travel.

How to Be Heard on the Show Floor

Individual headsets are the only way to conduct a press conference in a buzzing trade show stand at IMEX Frankfurt! And this was how Geoff Donaghy, CEO, International Convention Centre Sydney, talked about the Australian city’s “bold” decision to go without a large center for three years while the ICC Sydney was completely rebuilt on Darling Harbour. With the center set to reopen in December, Donaghy said it is not just a new building but represents a new way of doing business, where conventions are connected to the community. The space has been designed with an emphasis on flexibility and will feature and 8,000-seat ultramodern theater along with three other theaters, a Grand Ballroom, an outdoor event deck, a park area, and more. See a series of short videos about Sydney’s convention offerings at the Business Events Sydney website.

IMEX Frankfurt offers more than just a place to do business and network. It can also be a showcase for new meeting ideas, such as this “shake your salad” food station, with individual salad portions in shakeable jars, seen at SITE Nite Europe at the Kameha Suite event venue. 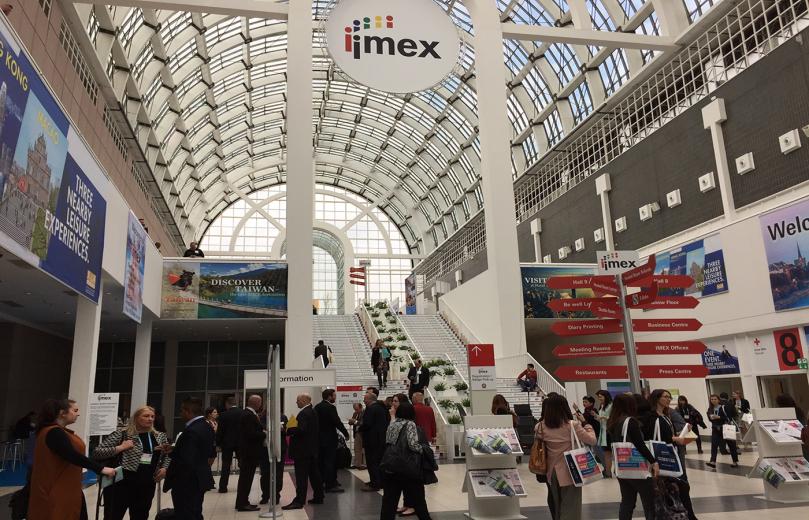 Next Up
At Last, an Industry Conference Gets Back to (Almost) Normal
Start Slideshow ›