Associates at the Stamford, Conn., headquarters of Starwood Hotels & Resorts Worldwide planned to help the Nature Conservancy clear winter debris from a field preserved for butterflies and birds, as well as perform trail work in the surrounding arboretum. Due to scheduling issues, the event was scheduled for May 1.

This year marks the fifth anniversary of Hyatt’s global month of community service, a key tenet of Hyatt Thrive, the company’s corporate responsibility platform. Because environmental sustainability is among the four key areas the program focuses on to help communities thrive (the others are economic development and investment, education and personal advancement, and health and wellness) some of the volunteer events are focused around Earth Day. A few examples from Hyatt properties around the globe:

• On April 22, Hyatt Hyderabad Gachibowli planned to clean up the Botanical Gardens, a stretch of horticulture and greenery in the Gachibowli area of Hyderabad, India. Along with an expert horticulturist and trained gardeners, the hotel's associates also  groomed the unkempt gardens, nurtured the flowering plants, and allocated proper garbage disposable bins.

• Associates from Hyatt Regency Birmingham in the U.K. took a day to clean up the hotel’s surrounding areas.

Hotels affiliated with the Houston-based Valencia Group planned to offer "sustainable sips"—drinks made from gins, vodkas, and whiskeys that have no additives and integrate organic botanicals such as thyme, rosemary, lavender, and sage—throughout the month of April as part of its Earth Day celebrations. The group also temporarily switched out the oranges in its logo to globes, and some of its properties planned to plant trees on Earth Day.

While many hotels worldwide celebrated Earth Hour on March 28 by dimming lights and lighting candles, the Renaissance Baton Rouge Hotel in Louisiana planned to celebrate Earth Day in similar style by using only candlelight in its Tallulah food and wine bar Wednesday evening.

Shangri-La Hotels and Resorts is rolling out a culinary sustainability initiative, Rooted in Nature, by hosting a month-long celebration of the group’s most exceptional food purveyors. From small farms in the Maldives to fishing villages in Malaysia, the hotels are recognizing the farmers, fisherman, and ranchers that make dining at Shangri-La not only delicious but also sustainable.

Special Rooted in Nature events and promotions taking place at all Shangri-La and Kerry hotels will highlight sustainable sources of produce, fish, and meat that can be found on the hotels’ menus year-round and celebrate the responsible purveyors provide Shangri-La chefs with high-quality ingredients. Dishes on offer include produce and herbs grown on hotel grounds, locally sourced organic vegetables and fruits, line-caught fish, and free-range poultry and beef.

L’Auberge Del Mar, A Destination Hotel near San Diego, planned to hold its third annual ocean preservation paddle on Earth Day. Participants also enjoyed chef “tasting” snacks on the beach afterward, and could BYOB (bring your own board) or rent one through the hotel’s concierge. The hotel’s chef also created a dish that was offered free to Earth Day dinner guests: organic beets and cold-smoked, sustainable farm-raised trout with watercress soup, valdeon bleu cheese, preserved lemon crème, and peppered walnuts. The Earth Day drink was the hotel’s eco-friendly L’Tini cocktail, which is made entirely from organic ingredients.

For the 11th consecutive year, the Fairmont Washington, D.C., Georgetown teamed up with the World Wildlife Fund to help students at School Without Walls at Francis-Stevens learn about plants and gardening on Earth Day. WWF and Fairmont staffers greeted students and teachers on the morning of April 22 with plants, flowers, gardening tools, and gloves, then everyone cleaned up the school grounds and began planting in the  gardens. All planting materials were provided by David Lindoerfer of InsideOut Landscaping Services of Silver Spring, Md.

United Airlines is celebrating Earth Day throughout the month. Customers traveling aboard the company's signature Eco-Skies aircraft in April will be flying carbon-neutral. Through United's Eco-Skies CarbonChoice program, the airline is obtaining carbon offsets for all passengers and crew on every flight of the specially painted 737-900ER aircraft, #432. The Eco-Skies aircraft is also retrofitted with fuel-efficient Split Scimitar winglets, which reduce fuel consumption by up to an additional two percent over traditional winglets. Carbon offsets alleviate the impact of greenhouse gas emissions by reducing emissions from other sources.

In collaboration with Sustainable Travel International, a nonprofit organization and long-time United partner, the CarbonChoice offsets from the airline's Eco-Skies plane are third-party verified to internationally recognized standards and will support GreenTrees' Advanced Carbon Restored Ecosystem (ACRE) project along the Mississippi River Valley. To date, GreenTrees and its landowners have planted some 36 million trees on nearly 100,000 acres along the Mississippi Alluvial Valley.

Guests who can show proof of green travel, either by showing their public transportation ticket or by driving a hybrid or electric vehicle, also receive a room upgrade during April, and one of the hotel’s sustainable sculptures is offering humorous eco-friendly tips.

Getting Fashionable In Pittsburgh

As part of a citywide Earth Day celebration, the Fairmont Hotel in Pittsburgh planned to host an eco-fashion show and Sustainability Soirée in partnership with Richard Parsakian from Eons, Izzazu Salon, and the Docherty Agency. Guests at the free event had to be over 21; it featured a special Earth Day cocktail with Wigle Whiskey at Andy’s Wine Bar, and live music.

Putting Down Roots in Houston

In Houston, Hotel Sorella CITYCENTRE's (from left to right) Director of Operations Safet Dokara, Director of Sales and Marketing Nancy Alonzo, and General Manager Ryan Gullion celebrated Earth Day by planting a 14-foot Red Oak tree at the entrance to the property.

BioBlitz is a species-counting competition designed to create awareness among golfers and the community about the environmental value of the habitats supported by golf courses. The program, sponsored by the United States Golf Association, is open to any golf course worldwide including those unaffiliated with Audubon International. As of Earth Day eve, 125 courses had signed up.

Following BioBlitz, Audubon International will compile the lists of plant and animal species recorded and report on the findings.

At Boston's Fairmont Copley Plaza, those who checked out on Earth Day received packets of flowers—and colleagues in the cafeteria also got the same flowery treatment. And other Fairmont hotels celebrated in their own ways. A few examples:

• At the Fairmont Sonoma Mission Inn & Spa, Sonoma, Calif., guests were invited to soak in geothermal mineral pools, enjoy a locally-sourced Farm to Fork meal, and go for a docent-led hike.

• Colleagues at Fairmont Chateau Whistler in Whistler
B.C., Canada, planned to participate in a garbage pickup day, called "Pitch-In Day in Whistler," on Saturday April 25 to clean up debris that appeared after the winter snow melted.

• Fairmont Pacific Rim, Vancouver, B.C., Canada, launched a new Rainbow Roll at The RawBar for Earth Day that features 15 sustainable seafood items. Each piece of the roll is handcrafted and celebrates The RawBar’s commitment to 100 percent Ocean Wise sushi.

• All four of the Fairmont properties in Vancouver planned to participate in a regional Great Canadian Shoreline clean up around the sea wall in Coal Harbour on April 27.

• The Fairmont Winnipeg in Manitoba, Canada, participated in the Downtown Biz clean up with the hotel sustainability team.

• Fairmont Mayakoba in Playa del Carmen, Q.R., Mexico, was recognized by TripAdvisor as a Platinum Eco-Leader. The Platinum recognition is the highest level awarded by TripAdvisor. On property, children learned how to make animals using recycled materials at the Discovery Club; and the on-property boat tours highlighted the green practices that take place every day at Fairmont Mayakoba, with the Tatich-Ha (Mayan word for Capitan) giving tips on how guests can, with simple everyday actions, make a difference (recycling, taking care of endemic flora and fauna, etc.).

• In California, Fairmont San Jose’s sustainability team organized a park clean up on April 24, 2015 in honor of Earth Day. Employees plan to clean and beautify the neighboring Guadalupe River.

The Fairmont Empress in Victoria, B.C., Canada, participated in an Earth Day Showdown on April 21. Members of the hotel's sustainability committee collected a total of 3,546 pieces of garbage on the property.

Approximately 10 hotel colleagues and sustainability team members from Fairmont Palliser in Calgary, Ont., Canada,  picked up litter on the highway to the Rockies that they sponsor. 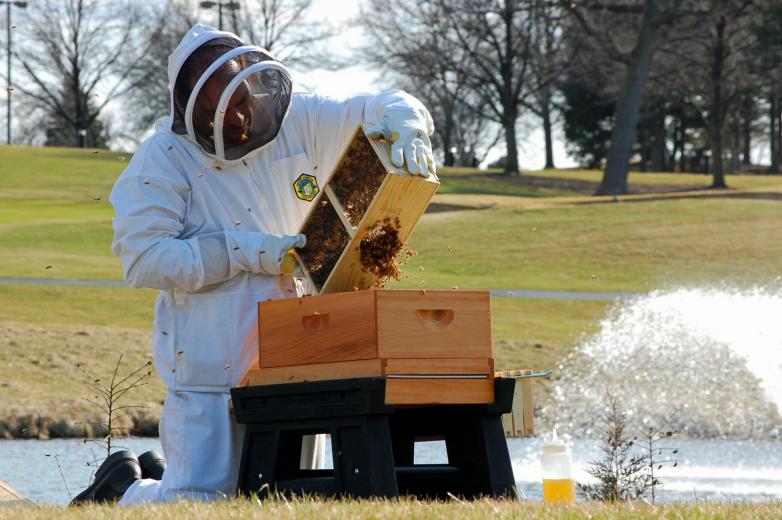