The newly opened 362-room Hotel Zephyr, part of Davidson Hotels and Resorts, sets a retro tone on Fisherman’s Wharf in San Francisco, in particular with its new venue, The Yard, which is a popular gathering place and can be booked for private events. This 11,600-square-foot outdoor lounge features interactive elements like larger-than-life-sized games, including Connect-Four, Jenga, tube ping-pong and a tabletop labyrinth maze. Marina-inspired gardens with features like shipping crates overrun with lush plants and other water features create instant event decor. Add the unique fire pits and voila: cozy evening networking.

The Yard at Hotel Zephyr: Who Wants to Play?

An overview of The Yard at San Francisco's Zephyr hotel.

In 2014, upon the completion of a $25 million renovation, the 484-room InterContinental New Orleans revealed brand-new meeting space and Trenasse, a new restaurant concept from Chef Jim Richard of the famed Stinky’s Fish Camp. The hotel opened up its lobby and now has more lounge areas with a variety of couches and chairs. Before the renovation, the lobby was located on the second floor and could only be accessed via the escalators.

Another view of the revamped lobby at the InterContinental New Orleans.

Atop the much-anticipated Godfrey, which opened in Chicago this past February, is the sprawling IO Urban Roofscape, offering a terrific location at the edge of River North, with deep southeast-facing views across the downtown; a small plates menu; a retractable roof to render weather powerless; and interesting and roomy spaces, including a fireplace terrace, cabanas, and water features. At 10,000 square feet, IO Roofscape is also the city’s largest rooftop venue. Shown is the indoor lounge.

A view of the Hotel Godfrey's IO Urban Roofscape's retractable roof, which makes even winter-time meetings in Chicago desirable.

The newly designed lobby at the 188-room Westin Columbus in Ohio affords an inviting backdrop for shared meals, playing board games, connecting on the new lobby computers, or interacting with fellow attendees. A vertical garden, or "living wall," is one of the center points in the lobby. It’s a focal element designed to improve indoor air quality and create a calming, more natural environment. The hotel also recently renovated its more than 12,000 square feet of meeting space.

The Living Wall at the Westin Columbus in Ohio is seen in this view of the lobby.

Seating areas in the ballroom foyer at the Fairmont Chicago, Millennium Park.

The Westin Boston Waterfront, located across the street from the Boston Convention and Exhibition Center, has transformed its lobby to create more open space.

Renaissance Indian Wells Resort & Spa, at the foothills of Palm Springs' Coachella Valley, has revamped its foyers, its GLO lobby area, and a specialized group networking area called STIR, designed for socializing in a casual bar/lobby-type setting. The GLO lobby area has expanded seating (including movable stools/poufs) and has increased its number of seating vignettes to foster interaction. The resort’s meeting space has also been renovated, with foyer/hallway areas converted to networking spots, featuring a mix of small and medium settings that can be moved around and reconfigured by individual users.

At the Grand Hyatt San Francisco, a first-floor renovation completed in late 2013 was designed to create a more social environment. There are now ledges set into the floor-to-ceiling glass windows along with higher chairs and more power outlets. A wall extending much of the way across the back of the lobby contains a fireplace, various art pieces, and different styles of seating. Called the Library, this space “draws people in to hang around for hours at a time, no matter if they are working or reading or conducting business; it’s just like a huge living room,” notes Michael Scherbert, associate director of sales for the Grand Hyatt San Francisco. “Overall, we have a much more communal environment now.”

Boston’s other Westin, the Westin Copley Place, close to the Hynes Convention Center in the city's Back Bay neighborhood, has created a more collegial atmosphere in its lobby.

The Vista Room at the top of the Hilton San Francisco Union Square is the perfect gathering spot for après-trade-show networking with one of the best views of the San Francisco skyline.

The View Room at the JW Marriott Grand Rapids has hosted an increasing number of small groups using meeting spaces outside of the boardroom/ballroom. The room, which overlooks the Grand River and city of Grand Rapids on the top floor of the hotel, is a popular space to rent by the hour.

At the Sheraton Chicago, a recent renovation created new “grouping areas” just beyond the lobby bar that have large tables each accommodating 12 people, plus higher chairs so that those seated are almost eye-to-eye with those standing. There are also new seating pods set near the floor-to-ceiling windows overlooking the Chicago River, and the Internet bandwidth in the public spaces was upgraded while electrical outlets were added under all tables. There’s also a two-sided lobby that allows one side to be reserved for networking throughout the day. Décor such as sheer curtains are generally used so that the space is not fully separated from the atmosphere of the rest of the public space. 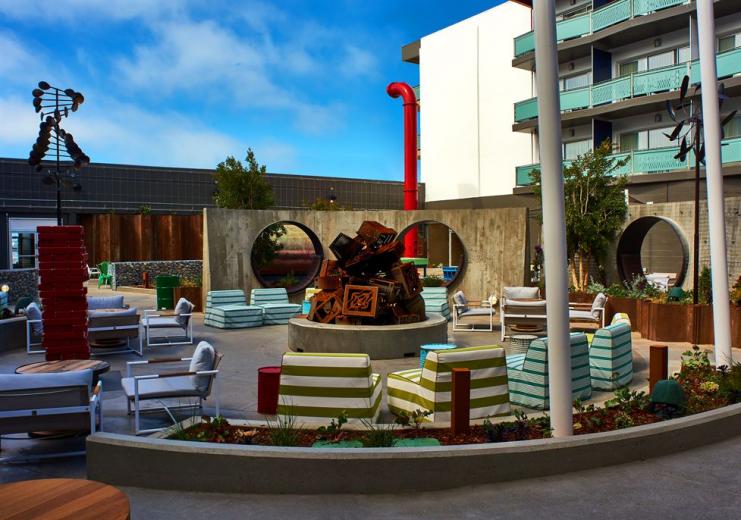