After arriving in Munich, we strolled through the pedestrian Old Town en route to our tour and activity at the new Museum of Urban and Contemporary Art (MUCA).

View of the beautiful Englisher Garten (English Garden) from our host hotel, the Hilton Munich Park. The 484-room hotel has conference and event space that includes 21 meeting rooms and a grand  ballroom that can accommodate more than 1,000 people.

A tour of the magnificent Allianz Arena, known as the world’s most modern football stadium, revealed fabulous meeting and event spaces.

The stunning BMW Welt, where car buyers pick up their new vehicles, not only showcases BMW’s latest models but also serves as a multi-use conference and exhibition center.

We enjoyed an elegant dinner and great views of the historic city center at the luxurious Hotel Bayerisher Hof located in the heart of Munich.

Our excursion to the Romanesque Revival Neuschwantstein Castle, situated in a heart-stopping mountain setting in southwest Bavaria, was unforgettable.

A traditional lunch, including Wiener Schnitzel, at Kreut Alm in the Alps.

A comfortable train ride brought us to the riverfront city of Cologne and our host hotel the Cologne Marriott, a very short walk from the station and the historic cathedral. The 365-room hotel sports inviting contemporary design and event space for up to 500 people, including 16 meeting rooms and two ballrooms.

Cologne’s hip Ehrenfeld neighborhood has interesting street art, relaxed street-side cafes, and venues that include the balloon-theme Balloni store and event space that can accommodate up to 500 people for a reception.

Germany’s oldest conference venue, the Gurzenich, was originally built as a civic ballroom and market hall between 1441 and 1447. It has undergone several expansions and renovations, and today the immaculately preserved complex is a popular setting for small and large events.

Begun in 1248 and eventually completed in 1880, the Cologne Cathedral is one of Europe’s Gothic masterpieces and a must-see in Cologne. It remained standing, albeit damaged, when the city was flattened during World War II. Old Town and Cathedral tour by Cologne Tourism Guided Tours.

Creative cocktails are enhanced by perfume essences at the Lab12 bar on the top floor of the Pullman Hotel in Cologne.

A fascinating visit to the European Astronaut center in Cologne included a tour of the facilities where astronauts train for stints at the International Space Station.

The Flora conference venue, reopened in 2014 after a three year renovation, is located on the grounds of Cologne’s beautiful botanical gardens. It has five conference rooms and can accommodate up to 840 people for an event.

Meeting at the Cologne offices of Intercom, a leading DMC in Germany, the group took a creative activity break to make carnival hats.

The spectacular grand finale of the trip: The annual Cologne fireworks display over the Rhine river and Old Town, synchronized with music 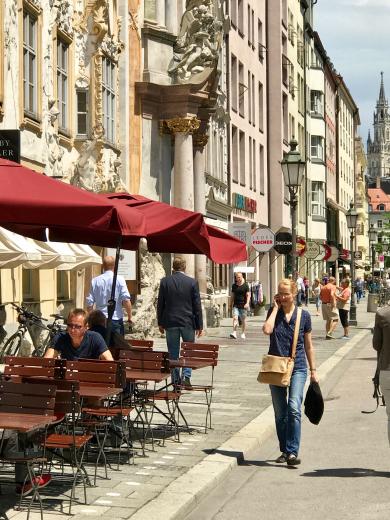