ADVERTISEMENT
Can You Sea Me Now?
Nick Hagen Photography

At ASAE’s opening-night reception at COSI Science Museum and adjacent Scioto Peninsula Park, a cast of themed characters greeted and took photos with some of the 5,000 attendees and exhibitors.

During the opening reception, attendees were able to ride a counterweighted unicycle 30 feet above the crowd inside COSI Science Museum.

To help attendees remember the annual meeting in years to come, ASAE’s event planners had a Columbus printing company set up shop at the opening reception and teach attendees how to screenprint logos onto T-shirts they could take home.

Alison Levine, an adventurer who has climbed the tallest mountain on all seven continents and reached both the South Pole and North Pole, closed the general session on day 2 with tales from her experiences and this relevant message: You often cannot control the environment you operate in—you can only control the way you react in that environment in order to lead a team and reach your business goals.

Content management firm OmniPress was one of several exhibitors that conducted mini-sessions in their booths.

Does This Coffee Smell Funny to You?

At a coffee-break lounge set on an outdoor patio at the convention center, the Columbus Zoo created a small petting zoo. This skunk was particularly popular, once attendees learned that it could no longer use its spray mechanism.

Shaping the Room to the Audience
Nick Hagen Photography

For the ASAE Classic fundraising event held inside 17,000-seat Nationwide Arena, planners used curtains to make the space more intimate for the 2,000 attendees.

Performance artists held court high above the crowd at Nationwide Arena during the ASAE Classic.

A Legend Captivates the Crowd

Singer John Legend, an Ohio native, put on a spirited 75-minute performance along with his band at the ASAE Classic inside Nationwide Arena.

A Moment in the Sun

As singer John Legend performed, he brought one very excited attendee on stage to dance with him, and her performance earned her a rousing ovation.

Going Out with a Bang
Nick Hagen Photography 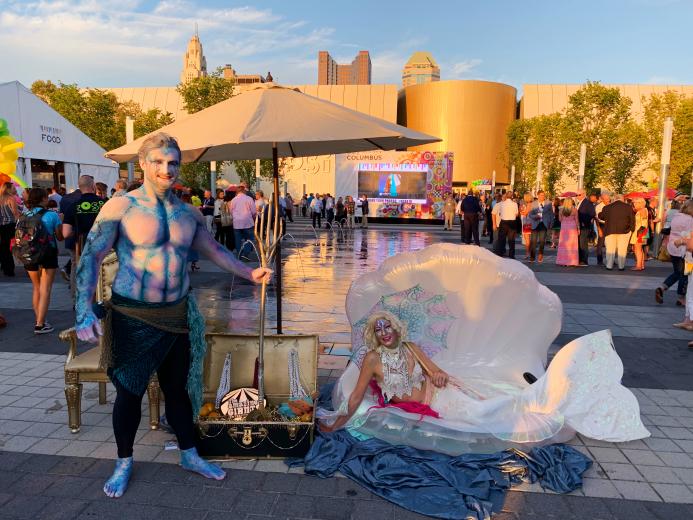